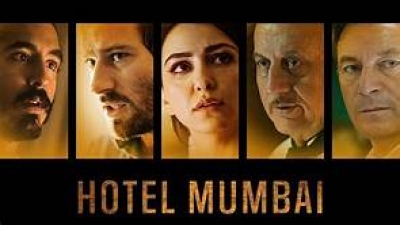 Several Muslim men, instructed by a voice named Bull who tells these young terrorist what they are supposed to do by use of head phones set out in the city of Mumbai to kill in the name of Allah. On November 26, 2008 many innocent people lost their lives all over the city, train stations, restaurants and lastly the Taj Mahal Hotel.

Arjun (Dev Patel) works as a waiter at the hotel and almost got sent home for a lack of full uniform but he pleaded with his boss Oberoi (Anupam Kher) and they worked things out because he needs the money for his family. David (Armie Hammer) and his female partner Zahra (Nazanin Boniadi), not yet married but they just had a baby boy have just checked into the hotel with their nanny Sally (Tilda Cobham-Hervey) for vacation. A playboy it seems has checked in earlier as well, Vasili (Jason Isaacs) who has a lot of money to spend on women and tips. As for Eddie (Angus McLaren) and Bree (Natasha Liu Bordizzo) they were lucky to escape an earlier attack but ended up at Hotel Mumbai to seek shelter but little did they know what awaited them soon after their arrival.

Suddenly shots rang out from above the lobby and also on the main floor and anyone who ran were killed, men and women, tourists and staff it did not immediately matter to these young men under the constant instructions from “The Bull” (voice of Pawan Singh). The terrorists went from room to room and sought out people to kill having no mercy on anyone. The special forces were hours away and people were dying by the seconds so the kitchen staff along with Arjun and led by Oberoi decided to rescue as many people as they could but for so many it was too late. Many hid out in the Chamber Room separated from their loved ones but thought to be one of the safest rooms in the hotel. Bombs were going off, fires were started and many people were jumping from windows in hopes of survival. “Prayer started this shit” a comment made by one patron of the hotel as suddenly Americans were rounded up in a room for the grand finale. I found myself at the end in tears not because of religion but for the people from many backgrounds and many cultures that have lost their lives that horrific day. Many people died that day basically half were hotel staff and half patrons of the hotel not being able to say, I love you, to their friends and family.

Great direction and writing and very realistic based on our knowledge of what happened that day. There were two or three moments in the film that I thought could have been stronger, one being the makeup on Arjun’s toe, the size pf the hotel and the amount of terrorists but overall the film is horrific to watch but as a film superbly done. My heart went out in the end to all these poor souls that lost their lives by the hands of others that followed a leader and their beliefs in Allah. This film will affect me for some time to come as it was so graphic, so real in this world now, so traumatic and so close to home.

Patel once again is awesome and helps bring to light the struggles of survival not only for him but all people even ones he did not personally know. The same goes for Kher and all the other members of the staff at the hotel as they even sacrificed their own lives for their hotel guests. Hammer, Boniadi and Cobham-Hervey were superb as they struggled for survival and the efforts to save their babies life. Isaacs is a bit of a mysterious unlikeable man at first but the fact of the matter people are people and fear and the fight to live can scare them all in different ways. The supporting cast and the extras in this film are all phenomenal and bring to life a film and a time I will personally never forget. I highly recommend seeing this film but if you have a weak stomach for horrific acts of violence maybe think twice.

More in this category: « Gloria Bell Us »
back to top

We have 394 guests and no members online