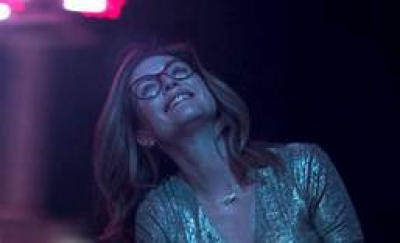 Gloria (Julianne Moore) is a divorced single woman of 12 years from her husband Dustin (Brad Garrett) who now has a new wife (Jeanne Tripplehorn). Gloria has two grown children from her marriage to Dustin, Anne (Caren Pistorius) a yoga instructor about to move to Sweden and Peter (Michael Cera) a father of one whose wife apparently spends a lot of time in the desert. Gloria lives a pretty normal but lonely life, living alone with the landlord’s son in the upstairs apartment who is always screaming that he wants to die. Actually if that were me I’d probably have killed him myself. It seems for some odd reason and to some mystery a stray Sphinx cat is always making its way into Gloria’s apartment and she is always throwing it back out. She spends a lot of time at singles bars dancing to 80’s music and drinking martini’s I guess in hopes of finding Mr. Right! Is Mr. Right a real human being or a fantasy women hope will one day knock on their door? I was thinking something else but figured I’d keep it clean with ‘door’.

Eventually from across the room, yes cliché, but it worked, she meets Arnold (John Turturro) and one thing leads into another and a relationship develops but what at first seems wonderful is not so much as time continues on. He is divorced from his wife a year now and has two grown codependent daughters that will not leave him alone. Yet like I’ve said many times all things do not always end up as they first appear and paying attention to those red signs can be very beneficial in your own happiness. As Gloria states in the film “people love their pets” and that they do especially when they are the only close family that really seems to care and give back the attention they receive. Has saying ‘I love you’ become so cliché as well so typical that it doesn’t necessarily mean anything in a developing relationship any more? In the end when things are down and you feel lonely it’s always good to know you have friends and sometimes family to help keep you going and once again dance like everyone is watching.

The movie is very real and for me tends to drag at times but it is nicely directed and written but I felt many times I wanted more and I got less. Moore is astounding and comes off very believable in her struggles of loneliness and older age. The music is all 80’s which is awesome so I’m sure the soundtrack would be great fun to listen to. We don’t get to see much landscape in the film since most of the time the story is in her apartment, her son’s or work but she did take a trip to Vegas. What happens in Vegas stays in Vegas and in Gloria’s case it pretty much does since it is this final time where reality sets in for what she wants and not what she thinks she needs. Turturro was a good opposite to her making their dating a bit frustrating yet honest. Overall the rest of the actors are fill but they all do great I just think the story line is a bit heavy and sad for my taste. You will definitely pull some messages and lessons from this film that you can use within your own real and daily lives. Good Luck!