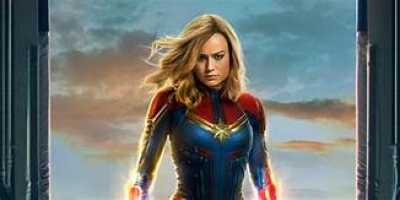 Thank you Stan! Carol Danvers aka Captain Marvel (Brie Larson) lives on planet Hala the capital of Kree civilization and is constantly having dreams that she does not understand. She repeatedly has a dream that involves the Supreme Intelligence, Dr. Wendy Lawson (Annette Bening) and a project known as Pegasus. Later contacted by Yon-Rogg (Jude Law) she is requested to help in a search and rescue mission to hopefully find a comrade spy they have planted among the Skrulls on another planet. But when things do not go as planned Carol finds herself on planet C53 crash landing into a Blockbuster Video store in the year 1995. The Skrulls known to be shape shifters have also followed Carol to this planet because they believe she has the power cell that Dr. Lawson created for light speed use.

There are a number of scenes on earth with Carol that are both intriguing and quite funny but also moments that explain other characters like when she meets Nick Fury (Samuel L. Jackson). It is also on earth, planet C53, that Carol finds many answers to her questions and dreams for that fact. One of my favorite scenes takes place on the subway train and yet another when she and Fury meet Goose, the cat. The cat made it for me since I’m a cat daddy myself. She also meets up with her past Maria (Lashana Lynch) and her daughter (Akira Akbar) who help to shine light on Carol’s past. We discover just who the enemy is, what their reasons are truly about and how Carol becomes Captain Marvel. We also discover just how and why Fury ends up wearing a patch over his eye. Many twists and turns take place in the story but all make sense in the end but make sure you stay until the last credit rolls since there are more than one scene that take place the last one being my favorite. It all leads up to possible answers in the next Avengers Initiative.

I was absolutely impressed with the direction and the special effects and the writing played out as more of a story tying up any thoughts of how certain characters evolved such as Fury. I thought one of the best action scenes took place on the subway since I absolutely loved watching the reaction on rider’s faces as the fight breaks out. Hosting a national pet show the cat won my vote for best supporting character and the intricate and sometimes funny roll this feline plays in the story line. Great CGI with a wonderful score and a lot to learn and watch, this film like all Marvel products will do well. Larson is a pleasure to watch as she explores for answers to her past. Jackson looked so young and as always does a phenomenal job with his character as Fury. Law I must say was great in his role as Yon-Rogg and although Bening has a short role it too was well done. All of the supporting characters such as Djimon Hounsou help to keep the story going and exciting yet even though there are some down times in the story overall it will do well even with a female lead which for action stars they usually fall on males. Yet think Wonder Woman and how tremendous that film did at the box office. This is a fun, exciting, yet at times tender and dramatic story line with humor laced throughout to help make the film match that of other super-hero type films.

More in this category: « How to Train Your Dragon: The Hidden World Climax »
back to top

We have 764 guests and no members online