How to Train Your Dragon: The Hidden World Featured 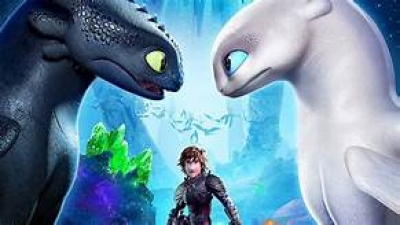 How to Train Your Dragon: The Hidden World

Universal Pictures, DreamWorks Animation and Mad Hatter Entertainment present a PG, 104 minute, Animation, Action, Adventure film directed by Dean DeBlois, written by DeBlois and based on the “How to Train Your Dragon” book series by Cressida Cowell with a theatre release date of February 22, 2019.

When the Vikings led by Chief Hiccup (voice of Jay Barucel) fight to release many captive dragons one dragon soon to be known as the Light Fury gets left behind. Back in Burk, the Viking and dragon paradise where both humans and dragons get along and work together Hiccup realizes that the more dragons they save the less chance they have of hiding from their enemy. That is unless Hiccup and his Dark Fury Alpha Dragon Toothless can find a hidden world beyond the waterfall at the end of the world.

Right now the Vikings feel safe that no one knows where they are but when Grimmel (voice of F. Murray Abraham) is hired by the dragon killers to capture the Alpha dragon, Toothless, the Vikings land becomes known. Grimmel uses the Light Fury as a ploy to capture Toothless but when his first attempt fails a bond begins to develop between both Furies’. Toothless is in love and Light Fury is playing hard to get but eventually a beautiful courtship develops among the two dragons putting them both in danger. At this same time Hiccup is faced with making some life changing decisions not only for himself but all of his family and friends as well.

With love comes loss and Hiccup realizes that also with loss sometimes brings a new path in life and what once was a friend can soon be more. Astrid (voice of America Ferrera), could now show her love for what once was hidden could now be revealed and sometimes with a secret that comes to surface it can possibly bring peace.

This final rendition of the book series made into films brings everything to an end with romance between two dragons set among beautiful landscapes and a delightful score that is sure to please not only children but adults as well. The relationship between two dragon’s one black and one white is so beautifully done that you can’t help but fall in love with them both. A great story that ties up loose ends leaves the audience satisfied and joyful. With a great group of superbly animated characters voiced by Cate Blanchett, Gerard Butler, Craig Ferguson, Jonah Hill, Christopher Mintz-Plasse, KrsitenWiig, Kit Harington, Justin Rupple, Robin Atkin Downes among many others this story is full of romance and drama with a bit of comedy laced throughout. This animated story is a symbol of what many of us strive for in our own lives, love, respect and peace among of species, human or dragon.