Fighting with My Family Featured 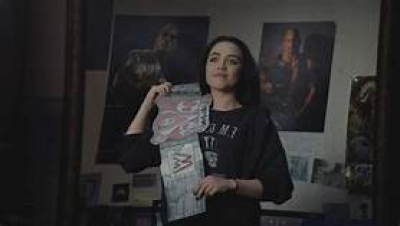 Based on a true story of a young brother named Zak Knight (Jack Lowden) and his younger sister Saraya (Florence Pugh) and their childhood dreams to one day join the World Wrestling Entertainment business, WWE. They live with their parents and family dog in Norwich, England and perform at and run a gym training not only themselves but young kids in the area. Born in a family of wrestlers, father Ricky (Nick Frost) and mother Julia (Lena Headey) the siblings trained every day in hopes of making it big in America.

Zak is dating Courtney (Hannah Rae) whose parent’s Daphne (Julia Davis) and Hugh (Stephen Merchant) know nothing about wrestling. As for Saraya she is a young woman at the age of eighteen born with low self-esteem issues which could be a problem if she ever wants to be a performer. They have sent numerous audition tapes to the WWE but have forever been turned down until that one day when they were told to come to auditions. One moved on and one went home!

Saraya had to change her name from Brittany to Paige due to that name already being used in the ring and off to Orlando, Florida she flew leaving behind her parents, friends and a very depressed brother Zak back in England. Her other brother Roy (James Burrows) was still serving time in prison but soon to be released. Meanwhile Paige is in training facing a tough Coach Hutch (Vince Vaughn) and three mean girls with looks like Barbie dolls. She does everything she can to try and fit in but sometimes things aren’t quite what they seem. Do blondes have more fun? Not if you can’t change your inner self as easily as your hair color! Tough love is never easy but it was nice to know that no matter in the end whether she gave up or not they always had her back even Zak when he realized this was her life and not his. In the end when Dwayne “The Rock” Johnson came to her with some news about the Diva’s Championship if you don’t know how it ends I won’t tell you what he said but maybe whether a wrestling fan or not you should go see it to find out.

In the beginning of this true story I was very doubtful if I was going to like the film but half way in the story it picks up and in the end it is at its best. Yes it is a cliché story in many aspects but like I said fan or not you’ll enjoy it. But with so many cameos of actual wrestlers I’m sure WWE fans will like the story more. It has passion, fight, integrity and the true meaning of family and the fact that blood is always thicker than water. A good friend once told me you can pick your friends but you can’t pick your family so hopefully they are always supportive of your wishes whether good or bad and for Paige her family wavered but came to light in the end. It is nicely written and directed but it is Pugh that makes this film worthy to see on the big screen. Frost and Headey are excellent actors and are very supportive in their roles as is Lowden and all the other supporting actors but it is Vaughn that really comes through with this role showing that he can play a serious actor when need be. For wrestling fans there are a lot of bells and whistles including so many cameo appearances but it is the story that shines through at least for me. And yes I’m not a wrestling fan!

More in this category: « Alita: Battle Angel How to Train Your Dragon: The Hidden World »
back to top

We have 699 guests and no members online