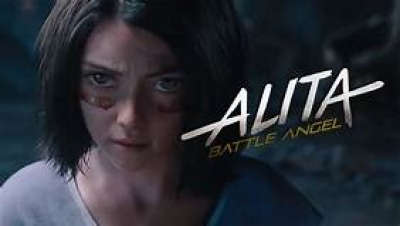 In 2563, three years after the fall Dr. Dyson Ido (Christoph Waltz) is exploring a scrapyard looking for spare parts for his practice as a Cyber Surgeon. As he glances to his side he notices the head of young girl and amazingly the brain is still active. Back at his clinic he works with his nurse tirelessly to give this girl a body the body that he had made for his daughter who was killed by one of his patients. With the right tools and his knowledge of robotics he is able to bring the girl to life with the capabilities of any live human. Matters of her past are difficult for the girl Dr. Ido now calls Alita (Rosa Salazar) since she cannot remember anything from her past but with some help she is developing some new memories.

Out in the Iron City Dr. Ido shows Alita what life is like on the ground, unlike that of Zollum, the last of the sky cities. It does not take long for Alita to make friends especially that of a young man named Hugo (Keean Johnson) who she tends to take a liking to. In the Iron City there are Hunter Warriors that are bounty hunters capturing bad beings wanted for murder and a search is on for a serial killer currently murdering woman within the city. Alita also comes in contact with a stranger named Chiren (Jennifer Connelly) but this unknown was actually once the wife of Dr. Ido who shared in the grief of their daughter’s death.

As time goes by Alita begins to regain some memory, enough so that she is beginning to know more of who she once was and what the number 99 means to her. As she struggles to discover her past, she develops feelings for Hugo and at the same time begins to acknowledge her fighting skills and just what she needs to use them for in order to help herself and mankind. In a club called Kansas she decides to confront all the other bounty hunters but things do not go well at first when confronted by Zapan (Ed Skrein) a handsome cyber person in love with his own face and the need for power. As a bounty hunter their jobs are to kill demons and become known as heroes of the Iron City. Yet when Alita gets confronted by a metal enemy what was once old has now become new making her even more powerful than before.

Meanwhile the eyes from above, Nova, who happens to speak through the body of Vector (Mahershala Ali) has plans for Alita and they are not friendly. Hugo holds a secret that could destroy the love between him and Alita yet when life has changed for him in the end Alita knows she cannot hang on. With her new found skills the battle continues for Alita not only in the number one game in Iron City known as Motor Ball but in her quest to reach that man in the sky as she comes to grips with who she was and who she is now.

The only film to be made in 3D and Dolby is amazing and should be a hit for writer and producer James Cameron. The 3D works and the Dolby is phenomenal and both fit the movie and its story so well. It’s amazing how real Alita seems alongside the other actors like Walltz who I admire so much for his skills on the screen, Connelly who turns out to be more than expected, Ali the one to watch out for, Skein the one full of vanity and Johnson the young handsome man with a killer smile and personality. From the start to finish this movie is an adventure with amazing backdrops accompanied by a superb score. This is a film filled with action yet drama, love yet anger, intrigue and suspense, everything to satisfy your need for adventure on the big screen.

More in this category: « They Shall Not Grow Old Fighting with My Family »
back to top