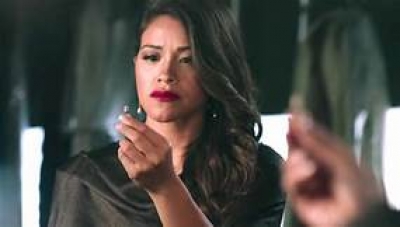 A make-up artist from California, Gloria (Gina Rodriguez) travels across the border to Mexico to visit her close friend Suzu (Cristina Rodlo) who is about to compete in the Miss Baja California beauty contest. The first night there the two friends decide to go out to a local club in hopes of seeing the Chief of Police who happens to be known to have a good influence on the pageant winners in the past. Not long after being at the club Lino (Ismael Cruz Cordova) and his men storm the club with the intent to kill the Chief of Police along with anyone else that gets in their way. Suddenly Gloria and Suzu are separated and Gloria has no idea where her friend has gone or if she is even alive.

No one it seems in Mexico is to be trusted, the police, cartel and even the DEA all seem to have motives some good and some bad. As for Gloria she just happened to be taken hostage by Lino and his men for knowing a bit too much. All she wanted to do was find Suzu and go home to her apartment and little brother but the road has become long for Gloria as she is used by all sides of good and evil with promises of finding Suzu in the end. The problem is when she does everything she can to survive she also finds herself being used and unsure who to trust as she is dragged into the criminal world. When a mole is said to be placed in Lino’s gang suspicion is everywhere and Gloria becomes the number one target at first. In a love hate misunderstood journey Gloria finds herself back at the pageant but this time with a plan to find her friend and bring her home. In the end, all plans always seem to take a turn and this one was surely a roller coaster ride of quick decisions of doing what needed to be done to survive.

I was uncertain about this film but must say that I absolutely enjoyed it. It tends to have a great mix of action, thrills and drama from start to finish, never getting boring but maybe a bit far-fetched at times. Amazingly so what a timely story with all the political hoopla going on in the real world between Trump and his wall which of course this movie also states is a waste of time and money but a great distraction for all his other dirty secrets. Enough on that! Any way this film is well written, well directed with a nice score and enough twist and turns to keep you guessing and intrigued. No animals really depicted in this film other than the criminals which are worse than most animals I’ve encountered. There are some editing issues with placement of props but all are not necessarily noticeable.

Rodriguez is exceptional in this role. She continued to do what she needed to in order to survive I would have liked to see her handle a gun just slightly more than she did but I guess that is left for the sequel. Anthony Mackie is in the film but mostly for a cameo role. Cordova is sporting the bad guy image with a sense of sex appeal yet tenderness versus ice cold water running through his veins all leading up to a job well done. Rodlo is the center of attention to drive the story but she doesn’t have a lot of screen time. As for the supporting roles all are well done and help to make this story worth seeing on the big screen.

More in this category: « Glass They Shall Not Grow Old »
back to top

We have 427 guests and no members online