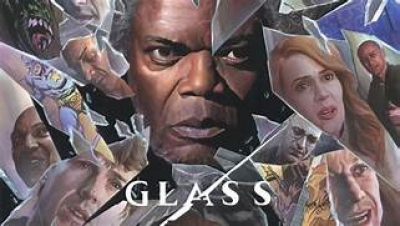 If you were a fan of “Unbreakable” and “Split” than most likely you will enjoy this story since they are all connected. By day David Dunn (Bruce Willis) works with his son Joseph (Spencer Treat Clark) in their shop but during breaks and nights out David saves the misfortunate on the streets. What he really seeks though is the Beast (James McAvoy) and all is twenty four personalities who continue to still be on his kidnap and kill course. This time on the other side of town in a secluded warehouse he’s taken four cheerleaders (Shannon Destiny Ryan, Diana Silvers, Nina Wisner and Kyli Zion) with the intention to feed them to the Beast.

Eventually Barry (another personality) and David are both caught by police and taken to the Raven Hill Memorial for the mentally insane. It is here where they meet Dr. Ellie Staple (Sarah Paulson) who is already working with Elijah Price to some known as Mister Glass (Samuel L. Jackson) who happens to spend most of his time in a wheel chair due to a childhood disease making his bones extremely brittle. So Dr. Staple and her staff have their hands full with these three patients let alone the so many others at Raven Hill.

Casey Cooke (Anya Taylor-Joy) the last survivor to be held in captivity by the Beast under the floors of the Philadelphia Zoo is in school and working on getting her life back in order. When she hears of a Super-Human Serial Killer being held at Raven Hill she speaks with Dr. Staple about a consultation with him mainly his character Kevin Wendell Crumb. Kevin gave Casey some great advice when she was being held captive with some other girls in the basements of the zoo. Also at the hospital is Elijah’s mother (Charlayne Woodard) and also Joseph Dunn who is still trying to get his father released.

In a plot to escape and garner lots of media attention both Mister Glass and the Beast are outside the hospital walls and David, the Overseer, is out as well trying to keep peace. Little did these three know that the Horde is keeping a close eye on them all to prevent any exposures of super-human strength but the big question is if they were able to keep things hush or has their secrets gone viral.

I enjoyed the film and they tie it in nicely to the other two films before this one, one which was nineteen years ago. The writing is well done and the direction is as well but what was best in this film was the acting. It has a great score and photography to help move the story along but at times I felt like it dragged slightly. Willis does and exceptional job with his character and Jackson is always spot on even when given very little physical abilities with his character making him more of a mastermind. It is McAvoy that steals the moments every time he is on scene he is hitting it out of the park. To control 24 people and their languages and personalities is awesome work. I did not find this story to be as good as “Split” but it definitely sets up the mood for more to come.

More in this category: « On the Basis of Sex Miss Bala »
back to top

We have 474 guests and no members online