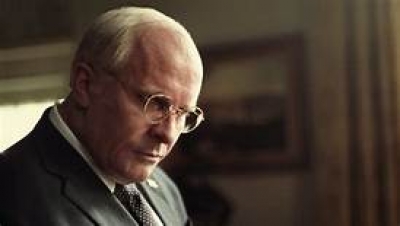 In 1963, Casper, Wyoming, a young Dick Cheney (Christian Bale) gets pulled over by police for driving erotically. After a bar brawl and quite a few drinks Dick was drunk, again. His wife Lynne (Amy Adams) was quite disgruntled and unsure of why she ever married this loser. After doing several jobs Dick decided to join the Congressional internship program in 1968 and ended up hired and working for Donald Rumsfeld (Steve Carell). Working for Rumsfeld, Dick was known as the quiet man, not really speaking out of turn especially with Nixon roaming the hallways. Once Nixon was out for reasons most of us know why Gerald Ford (Bill Camp) moved into his seat from 1974-1977 and Cheney became the Chief of Staff until 1977.

In 1978, Jimmy Carter took over the White House and introduced solar power as one of his platforms. Cheney decided to run for Congress but due to heart issues his wife Lynne hit the road promoting his campaign which he took from 1979 – 1989. Grant it soon Carter after one term was out and Ronald Reagan took over which soon thereafter the solar panels disappeared. George H. W. Bush (John Hillner) was Reagan’s Vice President and many believed he would become President in the future. During this time Cheney’s daughter Mary (Alison Pill) came out of the closet and Cheney became Secretary of Defense. But after all this ended for Cheney at the White House he worked for Halliburton as CEO, a large oil company, breed Golden Retrievers at home and washed his hands of DC.

In November, 2000, Cheney did run for Vice President under George W. Bush (Sam Rockwell) but not without specific demands which Bush agreed on and after the failed recount, once again a Florida issue and 537 votes Bush conquered Gore. The ATR was created and Colin Powell (Tyler Perry) became Secretary of State and privacy laws and torture of captive foreigners became part of life. In 2003, Cheney convinced Bush which wasn’t difficult to do that a country needs to pay for September 11, 2001 and the attack on America. There is still some question about certain decisions made that day! So who better to take down than a dictator like Hussein the leader of Iraq and the bombing began. We all know how that embarrassment turned out! Eventually Obama wins the White House and Cheney in order for his daughter Liz (Lily Rabe) to take Wyoming in a fight for election the family throws Mary under the bus so to speak. The rest is history.

Even though this film screams Liberal which I am for the most part I still think it won’t do great at the box office. The direction was a bit all over the place and the writing was so one sided I myself a democrat did not know whether to believe it or not! It was too long, too political, very historic making me feel like I was back in school sitting in history class and just a bit boring at times. As you’re watching the film the jumping around of characters and time was just too wide and unappealing to keep up with the plot behind this film based on a true story.

I will say though hats off to the casting, wardrobe and make-up departments since all of them and the score behind the story were home runs. Yet the most outstanding and Oscar worthy performances came from the cast with Bale leading the pack. He evolved into Cheney in physical and mental ways that were truly outstanding. Adams is fantastic as his wife and I would not expect any less as she is turning into the next Streep. Carell comes in and out and does his role justice but I still saw a bit of the old Carell coming out as a comedian of which Rumsfeld was not. At least not all the time! Rockwell was fantastic and the rest of the supporting cast and archive footage throughout the story helped its cause yet the acting was superb but the direction and writing not so much. Democrats may agree with this story but Republicans like my friend Matt who saw the film with me will be outraged. Humans, are they truly the most intelligent species out there? I sometimes think not!

More in this category: « Second Act On the Basis of Sex »
back to top

We have 547 guests and no members online