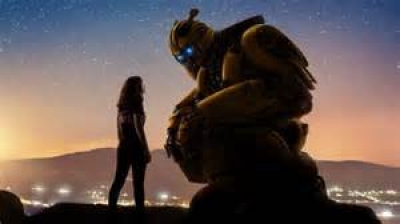 When a battle breaks out on the Autobots planet, Cypertron, against the Deceptacons Optimus Prime (voice of Peter Cullen) sends B127 (voice of Dylan O’Brien) to find refuse on the planet earth. It’s the year 1987 and Agent Burns (John Cena) is preforming military operations in the forest hills of California. That is until B127 makes am explosive landing right in front of Burns and his men. Not long thereafter the chase is on while the men try to hunt down this alien robot on the run. When B127 makes a run for it he eventually goes into hiding at Hank’s junkyard. Meanwhile in Brighton Falls a very unhappy girl, Charlie Watson (Hailee Steinfeld) is at home with her mother (Pamela Adlon), her mother’s boyfriend Ron, her younger brother and their dog Conan, a Jack Russell. Charlie lost her father to a heart attack not too long ago and since then stopped her champion diving and hardly breaks a smile. That is until one day at the junkyard looking for parts for an old vet she is restoring she comes across a yellow VW Bug that was filled with bumblebees. It was actually in decent condition and she knew she wanted it for her birthday which happened to work out.

It wasn’t until she arrived at home in her garage did she get to experience that her new old car was not just a car but a robot that had no way of communicating with her since losing his voice. Out in Texas two more explosive landings occur but this time it’s the bad guys Dropkick (voice of Justin Theroux) and Shatter (voice of Angela Bassett) and both have one goal, find B127 and find out where Optimus Prime is to destroy them and mankind on earth. Back in the garage Charlie names B127 Bumblebee and the neighborhood boy Memo (Jorge Lendeborg Jr.) with a crush on Charlie enters into the garage unannounced, seeing bumblebee. Secrets remain secrets between good friends so as the relationship grows between Bumblebee and Charlie the Deceptacon’s have forged a relationship with the U.S. military and Agent Powell (John Ortiz). But all is not what it seems and when one believes they are using the other the tables are turned and the battle between Bumblebee and the Deceptacon’s breaks out, lives are lost and the hope for truth and justice continues in a battle over good and evil.

I absolutely enjoyed this story. Of course you will probably hear that there were not enough robot battles going on throughout the story. But, I have to say I really got involved in the relationship between Charlie and Bumblebee, their learning experiences and the tender moments while learning to trust then care for each other. The film sets up so much that explains some of the other films but this one is truly well directed and written. It really draws you in to the relationship of a young girl with a robot but also the struggles she deals with since her dad died. In some of the action scenes from other films there was so much going on it was hard to follow but with this story it gets you involved and makes you feel part of what is happening on the screen in front of you. The effects, score, 80’s music and acting by all, Steinfeld, Cena, Adlon, Ortiz, Lendeborg Jr. and the extras and supporting characters all help to make this Transformer film one to see, enjoy, understand and get you involved in a strange relationship between a human and robot.

More in this category: « Welcome to Marwen Aquaman »
back to top

We have 887 guests and no members online