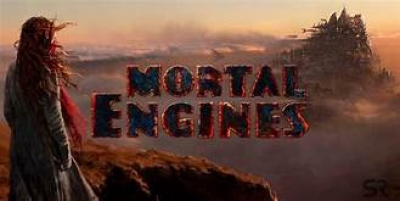 In sixty minutes the world ended as we know it and one thousand years later the world is run by the strong over-taking the weak not just the persons but their homes as well. Many of the remaining people on earth live in mobile homes and not the metal homes you may think of today but huge cities that move from place to place. London is one of the largest mobile cities and when they come along the path of a small city they ingest them, take the people and their belongings and use the city as scrap to fuel their own engines. This is when the city of London meets Hester Shaw (Hera Hilmar) who happens to be grateful for being captured since her plan is to kill Thaddeus Valentine (Hugo Weaving) the man who killed her mother Pandora (Caren Pistorius).

After an attempt of Thaddeus’s life by Hester in front of his daughter Katherine (Leila George) and London Museum employee Tom Natsworthy (Robert Sheehan) Tom chases after Hester for the crime she committed. Unknown to Tom she had a good reason for wanting to kill Thaddeus but when she whispers the reason before her fall Tom is faced with the same conclusion but this time from Thaddeus. Unknown to Thaddeus there is a witness to the crime and when Katherine finds out she begins to unravel clues that her father is not an honest man but rather a man filled with lies and secrets.

Thaddeus is working on St. Paul’s Energy Project within the church walls and no one is allowed to enter. Meanwhile Hester and Tom are on the run from Scabs and many other good and bad people in the outlands. After her mother was killed when she was eight years old she was raised by Shrike (Stephen Lang), a dead man turned robot, think terminator type, and he holds something of Hester’s as well as wants her for breaking her promise. When Hester comes face to face with Shrike it is Anna Fang (Jihae) that saves her and Tom. Joining forces Hester must avoid Shrike and continue to try and kill Thaddeus but in the meantime Thaddeus and his new weapon has a plan to head east and take control of the land civilization run by Governor Kwan (Kee Chan). The race is on the battle roars and some live and some die to a bitter end.

Obviously if the movie does well there will be a sequel. My expectations were low on this moving city action flick but I must say I liked it especially the beginning. As the story rolls on the wardrobes, special effects, cinematography and score are exceptional but the direction and writing weakens towards the ending. There are many cliché moments used from other films like Aliens, Golden Compass, Mad Max and several others. But I try to judge a movie as a film goer more than a technical critic and as a fan of movies this one was quite entertaining especially in IMAX. It is the fantasy of a film that works and not the accuracy of this moment in time. Most people like to escape their current lives for two hours and feel like you time jumped into another world or date in the past or future so on that merit this film works for me.

Hilmar with scared face and all does a good job as the lead of this story along with Sheehan her faithful follower and potential love interest. Weaving is great as the good guy turned bad who was really bad all along. Jihae can kick butt but I would have liked to see her a bit more on the relaxed side than always so serious, a little levity would have made a difference. George was somewhat lost both in her acting abilities and in the script. Lang I thought was awesome and I truly liked his character maybe a bit misunderstood but good. As for all the other supporting characters and the many extras they all helped to make this story entertaining and thankfully above my expectations. Surprising I did not see any animals in this story but I think they all got eaten at some time throughout history. Oh and by the way I thought the museum scenes in the beginning were quite funny and meaningful based on the words used to describe our life right now on earth. Also hats off to the developers of the mobile cities they were fascinating.

More in this category: « Mary Queen of Scots Welcome to Marwen »
back to top

We have 438 guests and no members online