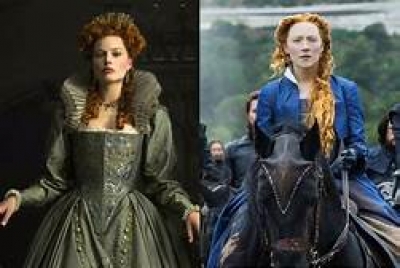 In the year 1561, Mary Stuart (Saoirse Ronan) the Queen of France arrives by boat on the shores of Scotland where she meets her brother at the castle. She meets with the English court as a Catholic and has plans to soon become Queen of Scotland and England. Queen Elizabeth I (Margot Robbie) of England does not see Mary taking over her land and as a Protestant she does not believe in Mary’s faith. Elizabeth happens to be in love with Robert Dudley (Joe Alwyn) but wishes that he would approach Mary’s hand in marriage as a way of taking control of her plans as Queen but Mary would not accept Robert. She is the blood heir to Scotland married or not. When Elizabeth comes down with the pox Mary celebrates of her possible death making it easier for her to take over England.

Soon Mary does marry Lord Henry Darnley (Jack Lowden) a young man who likes his men almost as he does his alcohol. A civil war breaks out between Scotland and England but Mary with the help of her noble followers wins this small but important battle led by her angry brother who does not approve of Mary’s rules. Lucky for Mary she became pregnant and after the child is born she writes Elizabeth whom she still has not formally met to be the Godmother as a gesture of peace and sisterhood and also because the men in both kingdom’s can never be trusted. Since Mary and Henry are separated and living in different castles it does not take long for the court to turn on Henry as well but not until after their son James was born.

It did not take long for the people of Scotland to turn on Mary, considering her a whore and traitor to their country so she fled to England under the protection of Elizabeth but later in February of 1587 when Mary was considered a threat to Elizabeth she was beheaded leaving her son James to rule Scotland, Wales and Ireland.

This film was amazing if you pay attention to what’s going on in the story. There are many betrayals, character identity changes and jumps in time that you really can’t turn away or you will be lost. I actually got very involved in the story and the history between Scotland and England in the 1500’s. The director and writers did not leave much out between the sexual encounters, the religions, the rivalries, the lack of trust in those times and the role for power not only among Mary and Elizabeth but all the men as well. Great score, superb cinematography and wardrobes to match the time in history this film is nicely done especially for an audience that loves history. The wardrobes may be different in this day and age but the political greed for power and control is very similar.

Robbie was almost unrecognizable as Queen Elizabeth but she surely did a fascinating job with her role. Ronan was truly outstanding as she fought to follow her religion and stay in control of her power. Good to see Guy Pearce in this period piece as well as Lowden, Tennant and Alwyn. For some people this film may seem a bit boring and yes confessing but overall with all the supporting characters and extras I happened to enjoy the story and a look in the history of two women, two countries and control for power. On the animal side of things you will see cattle that were used to win a battle, a faithful dog and a number of horses that all seemed to be treated well in the roles they portrayed.

More in this category: « Creed II Mortal Engines »
back to top

We have 220 guests and no members online