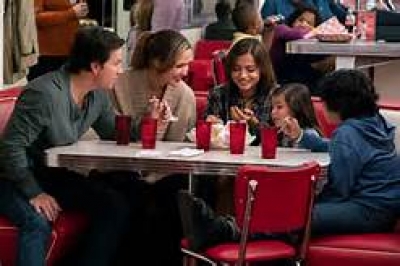 Paramount Pictures presents a PG-13, Comedy directed by Sean Anders and written by Anders and John Morris with a theatre release date of November 16, 2018.

Pete (Mark Wahlberg) and Ellie Wagner (Rose Byrne) own Wagner Custom Renovations and are well off enough to take time out to play golf at the country club. They have been buying older rundown homes for years and turning them over making nice profits from the resale but this newest home has something special and they hope that her sister might consider buying it. Something has been missing in their lives for a long time and it’s not a dog they have one already called Meatball and they both feel too old to have a child, a birth child that is! After looking on line at all the adoptable children that need a loving home they decided to look into the possibilities further. So, they head out to Kinship Center in town to start taking foster parent classes conducted by Karen (Octavia Spencer) and Sharon (Tig Notaro). There were several potential parents in the class, some religious, some gay, some single and then the Wagner’s.

As part of the class they attended an adoption fair, which gives potential new parents the option to get to know some kids in need of a home. There were definitely so many to meet all with different personalities some strong and some not so much. After meeting some of the younger kids, Pete and Ellie decided to visit the teenage group and right away the first one they meet is Lizzy (Isabela Moner), age fifteen and kind of harsh. Pete and Ellie did take a liking to her and decided to foster her but later they find out Lizzy has a younger brother and sister and the foster care facility hopes the couple will foster all three and maybe someday consider adoption. They do! Foster the three kids that is and for the first few weeks it was great but then the honeymoon was officially over and the true kids have evolved. Lita (Julianna Gamiz) only likes to eat potato chips and nothing else, Juan (Gustavo Quiroz) is a bit submissive and quite clumsy and then there’s Lizzy the misunderstood rebel that has a voice but uses it for everything wrong. Their birth mother Carla (Joselin Reyes) is out of jail for possession and use of drugs and wants to see her kids. This plays tough times on Pete and Ellie but they have no choice but to let it happen.

Ellie’s family as well as Pete’s mother Sandy (Margo Martindale) have come around and now support Pete and Ellie because through it all they really love those kids. In just a few months the couple has been there throughout everything even though there were times they wanted to give up. Lita with her screaming, Lizzy trading naughty pictures with a pervert and Juan who ends up in the hospital but through it all they were there as parents. Although when you’re told you are the worst kid in the world most of your young life it’s hard to ever feel loved. Imagine what it’s like for kids with no real family and home. As for these three kids their case ends up in court and four months later all their lives have changed forever.

I absolutely loved this film which is brilliantly directed and written. There are so many kids in need of love and a true family and sadly enough so many in the real world never see it especially the older kids. We know that for many, life with their real parents is not exactly a bed of roses but think what it would be like to move from home to home having people give up on you like your birth parents did for whatever reasons. This film is able to shed light on this topic in a comedic yet truthful way especially since it’s based on a true story. Kids are scared and as kids they usually seem to internalize those true hurtful moments and lash out later at the ones who truly love them the most. Albeit this is a film with purpose and worth the money to see it on the big screen, it made me laugh out loud and well up also. I loved everything about it. Wahlberg was excellent and you can see he is aging gracefully. At times though it looked like he was having a hard time not to laugh at the wrong moments.   Byrne was a great co-star for Wahlberg since they both tend to complement each other in the parental sense. Moner, Quiroz and Gamiz were all perfection as were Spencer and Notaro. Hats off to Martindale this woman is the Grandma everyone wishes they had. All the actors that played Ellie’s family were spot on and it was great to see Joan Cusack if only in a cameo. It is a bit different than what I expected from the trailers I’ve seen but I enjoyed it even more and think you will too.

More in this category: « Fantastic Beasts: The Crimes of Grindelwald Ralph Breaks the Internet »
back to top