The Girl in the Spider's Web Featured 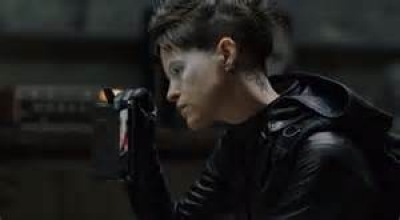 Clair Foy played by Lisbeth  Salender, the most dangerous girl in the world...... Estranged from her family as a child she choose freedom over staying behind with her insane/ schizophrenic/manic father, Frans Balder who is worshiped by her older sister Hannel Balder her sister who chooses to stay as she jumps from a balcony in the frozen tundra and disappears into a life of espionage and a constant daily battle to evade the people and captors that would sooner see her dead than continue to fight against the evil she was born onto. Even though her sister chooses to stay, Clair is haunted by who she has become and if she is one of the people in the messed up world she continues to escape and live in is somehow involved.

Men who pursue her to take her life will not survive her, the woman of her choice fall under her spell of lust and deceit and darkness only to be cast aside. She would stop at nothing to save a child of anyone working with the government and or agencies that are after her and befriends a young boy whose father is of the highest security who is eventually murdered by his own making it look like she (Clair) did it in front of his son. She is able to use the son's knowledge of his father’s secret codes to entrap and annihilate those chasing her to find our her sister Hannel is behind the entire scheme and realm of the hunt for her. She learns that her father died of his psychosis while in a sanitarium and the sister took over the fight.

The ending of a very thrilling, fast paced, full of tricks and uncanny adventures leads her to her last moments with her sister who after being shot with life threatening injured takes the same leap backwards that Clair took as a child leaving behind all the evidence in a computer that is found by the Americans to decipher... if they can...what all this truly means. If you are a fan of the Girl in the Dragon Suit you will love this movie! If you are an avid reader the books they are even more thrilling. I believe in my heart that there will be a third in our near future and it will be just as thrilling. You will truly be on the edge of your seat so be ready to watch, remember and take every action moment into to context because it will leave your head spinning.

No animals save a few spiders where blown up in this amazing film!

More in this category: « The Nutcracker and the Four Realms Overlord »
back to top