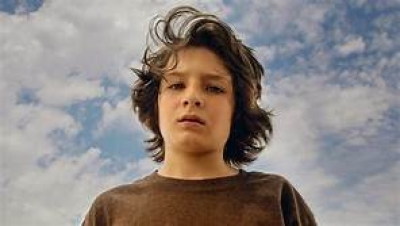 A24 and Waypoint Entertainment present an R rated, 84 minute, Comedy, Drama, directed and written by Jonah Hill with a theatre release date of October 19, 2018.

Stevie (Sunny Suljic) lives in Los Angeles with his abusive older brother Ian (Lucas Hedges) and single mother Dabney (Katherine Waterston). Stevie feels like he does not fit in not in his neighborhood or with his family, he’s even lost conversation with his mom. While walking around the streets one afternoon he came across some older kids skateboarding in front of some shops. It wasn’t until he ventured into the skateboarding shop, Motor, did he actually get the chance to sit in with the group, Ray (Na-kel Smith) who lost his little brother to a car accident, Fuckshit (Olan Prenatt) always on something like drugs or alcohol, Ruben (Gio Galicia) who first befriended Stevie with some bad advice and Fourth Grade (Ryder McLaughlin) the poorest of the poor but he constantly has a camcorder with him filming the guys.

Stevie ‘sunburn’ latched on to the boys pretty quickly watching their techniques on the boards but also picking up their bad habits to try and fit in. Even when his mother finds out it doesn’t stop Stevie from seeing the guys. Most of the time getting involved in alcohol, drugs and sex with an older girl, Estee (Alexa Demie) which was uncomfortable for him probably more than it was for me watching the scene. Albeit in the end when tragedy occurs due to an accident Stevie discovers he has friends and family that truly care about him.

The film reminded me of an after school special but only with bad language and some odd situations. I can see where Hill was going with the story but in my opinion he did not achieve the end results. There are a few bloopers in the direction of the film which tells the story of skateboarders but when it comes down to it I only got to discover little bits of everyone’s lives except for a bit more about Stevie. I really would have liked to see and learn more of the friends separate lives. Heck even a bit more about Stevie’s mother and why his older brother is so abusive. There is some interesting music in the film but the volume levels tend to be up and down. Overall I thought the film had potential but it did not achieve it for the big screen.

Suljic did a great job in his role as the lead character even his smile and laugh were infectious to the camera. Waterson could have used more screen time as did Stevie’s home life. Hedges character did not make a lot of sense to me. We never really learned what his psychotic issues were all about. I was drawn to Smith maybe because he seemed to be the most mature boy in the group and he really looked out for Stevie. Prenatt also worked well on the screen as the obnoxious friend that has more demons around him than he knows. Galicia is the friend with a slight attitude in the beginning that grows ever larger when jealousy sets in between him and Stevie. McLaughlin played the poorest kid of all but again we learned little else about his role. Last but not least among many other supporting actors and extras Demie did nice work with her scene of seducing a 13 year old boy. I can’t imagine a big audience for this film but the skateboarders may like it but might also have trouble understanding it.

More in this category: « Halloween Hunter Killer »
back to top

We have 643 guests and no members online