A Star is Born Featured 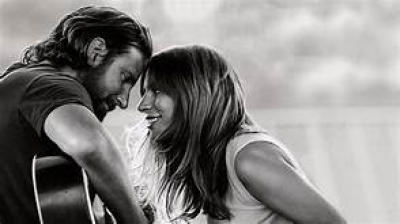 Jackson Maine (Bradley Cooper) is a singer and guitarist with a huge fan base and even though he lives a charmed life he is still very unhappy. That is until one night after his concert he wanted to grab a drink and did so unknowingly at a local Drag bar. This is where he first meets Ally (Lady Gaga) and sparks fly for Jackson. Ally is a server at a local establishment and she had tried to break into the music industry but many said for one thing her nose was too big and prevented her from moving on up rather than down. She continues to write her own music but after her and Jackson become an item he started to sing her tunes and one night invited her on stage to sing at one of his concerts. This was the beginning of a star.

Jackson was already a heavy drinker when they met but Ally had no problem taking care of matters like a bar brawl. She and Jackson start spending a lot more time together as Jackson treats her like Julia Roberts in “Pretty Woman” inviting her to sing at his concerts and singing songs that she has written. She kept getting bigger and bigger attention and soon got approached by an agent that offered her his services. Hitting the recording studio and getting a dog her business and private life were growing beyond belief right down to a proposal and quick wedding with Jackson. All was told that if she doesn’t dig deep in her soul she won’t have legs. That is not a problem for Ally as she even gets a guest spot on SNL. The caterpillar has definitely turned into a butterfly being nominated for three Grammy awards. Yet as her career started to take off and grow Jackson’s life became more filled with alcohol and depression causing arguments between him and Ally.

Jackson finally attended AA and when he returns a sober man Ally’s producer tells him he almost destroyed his wife’s career. Taken to his heart and a few drinks later Jackson made a choice to help Ally’s career which lead her to never love again.

This film directed by Cooper already has Oscar buzz and rightfully so. I can’t remember the past version with Streisand but I understand the story is very similar with not too many liberties taken to change it. I screened it in Dolby sound which was remarkable during the music scenes. Looking like her normal self the makeup and wardrobe departments did a wonderful job. The film almost seemed like it was written for Gaga based on her rising stardom. Either way this film was great. Sam Elliott who works with Jackson Maine was spot on and Andrew Dice Clay who plays Ally’s dad was amazingly likeable in a role well done. The true stars of course are Gaga and Cooper who will definitely be nominated, Gaga for leading lady and Cooper for Director. Albeit this film is perfection and a must see by all especially if you’re a Gaga fan.

More in this category: « Venom Goosebumps 2: Haunted Halloween »
back to top

We have 752 guests and no members online