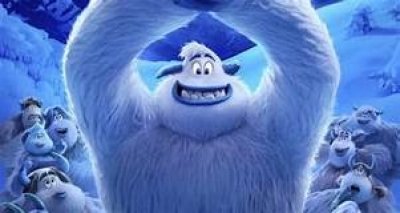 Everyone knows the elusive Yeti exists but they are just very difficult to spot. Mainly because Migo (voice of Channing Tatum) his father Dorgle (voice of Danny DeVito) and many other Yeti’s live on stones way above the clouds. Dorgle is the morning gong ringer that wakes up the sun hence all the Yeti’s. The Stonekeeper (voice of Common) is the leader of the Yeti who lives in a large cave with his daughter Meechee (voice of Zendaya) and son Thorp (voice of Jimmy Tatro). As the leader he tries to keep the village safe as the followers of the stones that is until Migo stumbles across a plane crashing on the other side of the mountain. When the plane stops Migo comes across a parachute and hidden beneath it is Percy (voice of James Corden) a small foot. Now he knows they exist and he has proof. Well that was until a big gust of wind came and blew him back below the clouds.

When Migo returns to his village to tell the Stonekeeper and the others that small foot does exist he is soon banished for lies. Off on his own Migo is in search of proof that small foot does exist because he saw him. Little does Migo know soon joining him are Meechee the girl he likes, Gwangi (voice of LeBron James), Kolka (voice of Gina Rodriguez) and Fleem (voice of Ely Henry) all out for the same purpose. When Migo makes the jump alone below the clouds he discovers a town and finds TV host Percy at the Yak Shak where he was meeting Brenda (voice of Yara Shahidi) his assistant. When Percy leaves the Yak Shak he comes face to face with Migo but things don’t go well due to of course the language barrier between man and Yeti.

It’s a long journey home for Migo and his proof of small foot, Percy. Yet when he arrives back at his village even with Percy what he discovers from the Stonekeeper is not at all what he expected. Through it all Percy learned about integrity and for Migo and his village they also learned a lesson that miscommunication can cause problems that could last a life time.

I enjoyed this film which is well directed and written and a good job by the casting department on choosing the voices. Many times I feel an actor’s voice doesn’t match the animation but in this film they did a nice job. Even though this animated story is not done by Pixar which in my opinion is the best in animation, Warner Bros. did well here. I would recommend this story which is good for kids and adults to enjoy at a theatre near you.

More in this category: « Night School Venom »
back to top