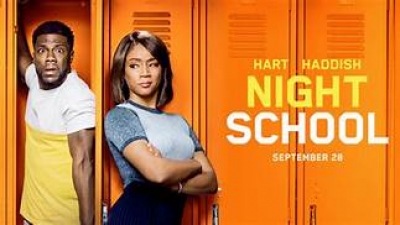 Back in 2001 when Teddy (Kevin Hart) was at Piedmont High School in Atlanta, Georgia, it was time to take his final test before graduation but things did not go as planned. Seventeen years later, Teddy is still not a high school graduate but working at Joe’s BBQ City and has received continual employee of the month awards. One thing Teddy is great at is selling and also having a beautiful girlfriend named Lisa (Megalyn Echikunwoke). A matter of fact Joe was so thankful for all the great sales Teddy closed he decided to leave the business to Teddy not his son when he retires. Thrilled with the news Teddy meets Lisa and friends for a nice dinner little did he know it would be an eight hundred dollar dinner. Yet with the hair incident in his food and a fired waiter later Teddy decides to ask Lisa to marry him and that is before the explosive incident at Joe’s BBQ.

Life for Teddy became even tougher looking for a job and getting turned down from anything good since he did not have his GED. Back at Piedmont High School Teddy decides to go to night school to achieve his GED. He not only meets his high school nemesis Stewart (Taran Killam) who is now the Principal but also his teacher Carrie (Tiffany Haddish) who is tough from the core. Teddy meets a classroom of misfits (Mary Lynn Rajskub), Mila (Anne Winters), (Rob Riggle), (Romany Malco), (Jacob Baalon) and Luis (Al Madrigal) all from different walks of life and all in need of a GED. They all have their ups and downs but as for Teddy he has issues with Lisa, can’t find a decent job other than a Christian chicken joint and his car is gone. Could life get any harder well it does before it gets better but the people that you doubt in life may sometimes be the ones that are there for you in the end whether in good or bad times.

First off I am a huge Kevin Hart fan and he personally doesn’t disappoint as an actor and a writer. There are some editing issues that I caught but overall the film is funny with a touch of a lesson about life attached. Whether in or out of school Hart performs well once again as a leading man. Haddish who was hysterical in “Girl Trip” does a nice job here but not quite as funny as her other film. I might blame that more on the director than the writers because it’s not because of her performance. All of the misfits are quite funny with Riggle leading the pack. Overall a good comedy that will surely have you laughing a few times throughout the story thanks to a good cast. It did not look like any animals were harmed in this film other than the fried Christian chicken.

More in this category: « Life Itself Smallfoot »
back to top