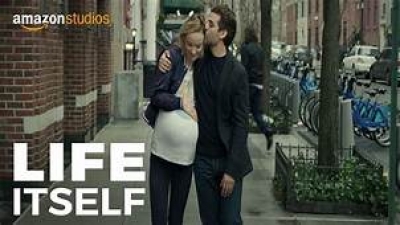 Chapter 1, narrator Samuel L. Jackson (Samuel L. Jackson) is looking for a hero for this story. He thinks it could be Will (Oscar Isaac) who is in a therapy session with Dr. Cait Morris (Annette Bening) but nah it’s not him but maybe it could be Dr. Morris. Cut to a scene on the New York Street tragedy strikes that changes Will’s life forever but eventually has meaning to people he does not know. You see Will’s love of his life Abby (Olivia Wilde) whom he meets in college is pregnant with their first child. His parents Irwin (Mandy Patinkin) and Linda (Jean Smart) are thrilled with the idea of becoming grandparents. Abby was a proud mother to be that tragically lost her parents when she was seven and will never forget what had happened to them because she was there as well. Life has a way of throwing traumatic moments at you whether prepared or not and for a child that is three weeks away from looking in her parents eyes for the first time never has that moment.

Chapter 2, Dylan Dempsey (Olivia Cooke) grew up with her grandfather Irwin and they shared a special bond but when she was twenty one, always a significant date the day she was born, she knew one day she would move on. Currently she was in a local band, PB&J but when memories take over in her head she decides to be alone sitting on a bus stop bench when suddenly she has an outer experience from the past and a vision of a young Spanish boy on a bus.

Chapter 3, the Gonzalez family, we get introduced to Javier (Sergio Peris-Mencheta) who works in the olive fields for Mr. Saccione (Antonio Banderas) a wealthy business he got from his father. Saccione decided to promote Javier because of his skills and dedication to the land and the picking of olives that are later turned into olive oil. Javier had great news for Isabel (Laia Costa) his true love that he received a promotion so soon he could care for her, put a roof over her head and start a family. Along came Rodrigo (Adrian Marrero) and with that many visits, too many in Javier eyes, by Saccione who later in Rigo’s life he promised to take the boy to New York City. Javier would not have it so instead he took his wife and child to the city in America. On their return back to Spain Javier got tired of Mr. Saccione always coming along so he left his wife and child for a job in Madrid, at a time when Rigo needed him most of all.

Chapter 4, Rodrigo (Alex Monner) is all grown up and his mother has asked that he go and live his life in New York at the university that accepted him. Rodrigo was a great student, tops in his classes, into sports and a new girlfriend named Shari Dickstein (Isabel Durant) which their relationship was short lived for good reasons. Meanwhile Mr. Saccione, known to Rigo as Uncle has written letters to Javier asking him to return home, also for good reason. Back in New York two lost souls meet and spend a life time together.

Chapter 5, Elena (Lorenza Izzo) is giving a presentation explaining that life always gives us ups and downs that will span generations but when we go far enough we will find love.

This film was amazing. In my synopsis I tried not to give too much information but rather give you a shell of what this movie is about but keeping the insides a discovery for the audience to interpret it in their own way. In the beginning I thought I was not going to like this film but after the first 15 minutes and I started to understand and see where this film is taking me it all made sense and left me breathless and tearing up in the end. Each person that see’s this story will relate to it in their own ways with their own stories to flash back on, remember or visit within their own mind, like the characters did in this story. I advise you do not leave your seat for a bathroom run or popcorn because if you miss one scene you may be lost on the plot once you return. This is truly a poetic story about life with a constant audio stream of the song ‘Feel my love’ throughout so many of the scenes. This is a must see in my book that will leave you believing once again that life happens and you can’t stop it.

Isaac was phenomenal as is Wilde. Benning is not a major role but important to the first chapter. Cooke, Monner, Izzo, Durrant, Peris-Mencheta, Costa, Smart, Patinkin and Marrero all had side stories that are important to the entire meaning behind the competed film. As for Banderas he really shined in this role with his Spanish language that was accompanied with subtitles. Overall in the end I highly recommend this film especially for everyone that thinks we are all connected in some strange way.

More in this category: « The House with a Clock in its Walls Night School »
back to top

We have 787 guests and no members online