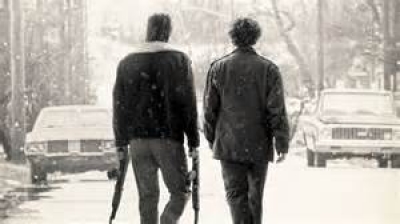 Columbia Pictures, Studio 8, LBI Productions and Protozoa Pictures present an R rated, 110 minute, Crime, Drama film based on a true story and directed by Yann Demange, written by Andy Weiss and Logan Miller with a theatre release date of September 14, 2018.

In 1984, young Rick Wershe Jr. (Richie Merritt) is at a gun show with his father Richard Sr. (Matthew McConaughey) in Detroit. Rick Sr. would buy the guns low and sell them high to buyers and Rick Jr. got involved by selling to Johnny ‘Lil Man’ Curry (Jonathan Majors) a big drug dealer in town. Actually Johnny was the man that gave Rick the name “White Boy Rick”. At home Rick lived with his father, his sister Dawn (Bel Powley) who was messed up with drugs and the wrong crowd and across the street was his grandparents Roman ‘Ray’ (Bruce Dern) and Verna (Piper Laurie). Dawn was never happy at home and eventually moved out, only to surround herself with more drugs.

Rick Jr. soon became part of Johnny’s world, hanging with Edwin ‘Nugg’ Crutcher (Raekwon Haynes), ‘Freaky Steve’ Roussell (Ishmael Ali) and Rudell ‘Boo’ Curry (RJ Cyler) and all were invited to Johnny’s wedding when he married Cathy Volsan (Taylour Paige). In 1985, Rick got involved with the FBI, Agent Snyder (Jennifer Jason Leigh), Agent Byrd (Rory Cochrane) and Detective Jackson (Brian Tyree Henry) as they utilized Rick for information by having him buy then eventually sell drugs, helping the FBI identify and later arrest his patrons. Rick made some good money during this time since the FBI let him keep some money in return for his services. When things got out of hand and rumors surfaced Rick Jr. got shot in the stomach.

In 1986, Rick Jr. finds out he’s a father to a beautiful little girl. It only takes one time without protection to create a new life. Thankfully he and his father accepted the fact that Rick Jr. was a dad. Yet Rick Jr. needed money and by moving away from the FBI he visited Art Derrick (Eddie Marsan) a big kingpin drug lord for enough supply to sell and make big money. In 1987, Rick Jr. became a big drug kingpin himself, since Johnny and his gang were in jail he took over the business as well as a few other things that Johnny loved. In the end though things worked out for most of the Wershe family but Rick Jr. was not as lucky.

I enjoyed this film which plays more like a documentary than a Hollywood thought up crime story. It is very well directed and written but since I had two not one but two couples behind me chatting throughout the film I’m not sure if I would have liked it more if I didn’t hear the people behind me cackling in my ears. I was able to keep up with the story but lost track at times of some of the characters.

McConaughey once again throws himself into the role not only with his acting abilities but his physical appearance as well. Merritt who I am not familiar with really controls this story from start to finish. Powley was awesome and played a drugged up sibling to the core. Jason Leigh, Henry and Cochrane come in and out of the story half way through but their parts are not huge. They did however pull off their scenes with belief and professionalism. Dern and Laurie bring a bit of humor and levity to their screen time. Ali, Haynes and Cyler were all good supporting characters to Rick Jr. and helped to keep the story moving. As for Majors he brings a bit of fury and aggressiveness to the film. Overall I enjoyed the story but found myself not overly enthused with it. Surprisingly there are no stereotyped pit-bulls or Rottweilers in the story but there are some rats and a goldfish, one with a bitter ending and the other a witness to a crime!

More in this category: « A Simple Favor The House with a Clock in its Walls »
back to top

We have 263 guests and no members online