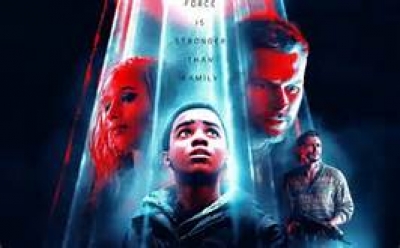 Movie Review Written by Jon Patch with 2.5 out of 4 Paws

Fourteen year old Eli (Myles Truitt) is the adopted son of Hal (Dennis Quaid) who lives in Detroit, Michigan. Hal’s wife died some time ago and their biological son Jimmy (Jack Reynor) is just getting out of prison after six years. Eli has been making money for himself on the side by scraping in old abandoned buildings throughout the city. What he stumbles upon in one of the buildings is something from out of this world and something that Eli has not shared with anyone. After running away from the scene of some type of other-worldly beings he eventually returns in search of a type of weapon he saw before. What he finds is that mostly everything has been cleaned up at the scene yet he does come to find the weapon he was in search of.

Meanwhile Jimmy returns home but after an altercation with Hal over the need of money to pay off some local criminals he is cast out of their house. The story of course does not end there between father and son but what happens next leaves Jimmy to go on the run with his little brother to Tahoe which was a place favorited by their mother. On the run from Taylor Balik (James Franco) and his not so merry men since the death of Dutch Balik (Gavin Fox) caused by Jimmy in a shootout Jimmy thinks he will find safety in Tahoe. Yet Taylor and his men are not the only ones in search of Jimmy and Eli, two of the alien life forms are now after the boys as well. Along their travels to Tahoe the brothers stop at a strip joint where they meet Milly ‘Sparkles’ (Zoe Kravitz) who happens to join the guys on their journey out west. The road is a bit of a bumpy one for them all especially since Eli has revealed his new found weapon that only he can use. Lee Jacobs (Romano Orzari) the owner and rough guy of the strip joint is out to roughen up Jimmy for several reasons but things don’t go as planned. Let’s just say pay back is bitch!

It is their stop at a Nevada casino that brings the brothers to face not only the police but also later on Taylor and his gang as well as the alien beings. In a standoff at Sulaco County Police headquarters everything comes to a close. Eli knows that his father was right to be hard on the boys because the world is hard. Also that a good man does the right thing and just because you’re by yourself it doesn’t mean that you are alone. Obviously this story is not done and strives to live another day as a sequel for the big screen.

I guess a sequel for this film will rely on a good box office. I will be curious to see the numbers after its first and second weekend. I enjoyed the story but found it to drag a bit here and there but when the action kicks in the film becomes more enjoyable. It just felt a bit long and uneventful at times but truly I did still enjoy it overall. It is filled with holes that I guess they will answer in the next film but it still made you question all the clues they give you along the way. I found myself thinking a lot of what will be the answers to my questions for the next edition of the film. Lord knows I have many thoughts and I think I just may be correct. Some good scenery along with a decent score helps to move the story along but I would rather have seen more use of the weapon and some answers to my several questions that have gone unanswered.

As for the acting from the cast, Quaid always shines whether it is a large or small role. Reynor is quite exceptional as is Truitt whom both lead this story and Kravitz has some good side stories and thoughts along the way but I think there is more to her than they show. It is Franco who blows the roof off playing a very bad man but I must admit I still had a hard time getting passed him as a comedian. The rest of the cast are supporting characters that do a nice job bringing side stories and intrigue to their roles. Overall I wish they would have told more about what matters and not using this film as a stepping stone for a sequel in order to answer so many mysteries within the script. Again I have my thoughts for the future of Kin 2 and if written well will hopefully give the answers that the movie goers deserve. As for the animals in the story we get a Pit Bull of course stereotyped, an owl and quite a number of cows. Enjoy!

More in this category: « Alpha Searching »
back to top

We have 441 guests and no members online