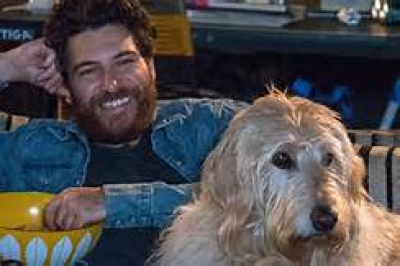 Movie Review Written by Jon Patch with 3.5 out of 4 paws

LD Entertainment and Dutch FilmWorks present a PG, 112 minute, Comedy, Drama with a touch of Romance movie directed by Ken Marino, screenplay by Elissa Matsueda and Erica Oyama with a theatre release date of August 8, 2018.

Well one of the other critics said this film is right up my alley and of course it was, dogs, dogs and more dogs but no cats. I think they missed the mark on that one unless they are thinking of the next film, Cat Days, you never know. The saying goes cats rule and dogs drool and there is a good amount of drooling going on here not only by the dogs but the human characters as well.

Elizabeth “Liz” (Nina Dobrev) is the host of Wake Up LA who had a boyfriend until one day she came home and Peter (Ryan Hansen) was not quite alone in bed and as for Sam Nina’s dog he retrieved a bra which as not hers but rather the dirty blonde in the bed. Time for a break up which made Liz depressed that is until one day a new guy enters her life, Jimmy (Tone Bell) and his dog Brandy. They first meet on her television show that led into Jimmy as her new co-host and later the love she always needed, besides Sam that is. Liz would visit her dog therapist (Tig Notaro) in times of need for Sam which was really a time of need for Liz. Liz puts her trust in Jimmy not only for the show but her heart as well and hopes he doesn’t break it!

Tara (Vanessa Hudgens) works at a coffee shop where in the back dumpster area while taking out the garbage comes across a small cute homeless Chihuahua that she brings into the shop for some food and later a visit to the veterinarian Doctor Mike (Michael Cassidy) the man behind the dog with the good looks and charming personality, at least until you get to know him. Think Madonna and her song “Material Girl”! But it is Garrett (Jon Bass) who put his life into a dog adoption shelter named New Tricks Dog Rescue that becomes close friends with Tara and even more so when he needs her help finding a new rescue since the landlord is not renewing his lease on his building. As for the little homeless dog Garrett named her Gertrude otherwise to me looks more like a helmet head!

Tyler (Finn Wolfhard) is a young student that works on the side delivering pizza. He was a regular to knock on the door of an old man who lost his wife and lives with Mable the pug. That is until one day while walking Mable he has a health crisis on the sidewalk whereas Mable runs away. Short time later Tyler and the old man (Ron Cephas Jones) forge a friendship and a search for Mable.

Grace (Eva Longoria) and her husband Curt (Rob Corddry) have welcomed a daughter into their lives. One major issue she is not happy even though her new parents have tried so hard to please her with so many things but it took a fat little lost Pug to bring the personality out in her. The problem of course somewhere out there is Mable’s pet daddy and when the time comes choices shall be made whether Mabel comes home or stays with Amelia (Elizabeth Phoenix Caro).

Last but far from least is Dax (Adam Pally) the bachelor man with no real plan other than his band Frunk and his pregnant sister (Jessica St. Clair) who is having twins with her husband Greg (Thomas Lennon). Dax is a bit unreliable but when his sister goes into labor she requests that he take Charlie their dog for a few weeks until the babies come and get adjusted to their new parents and home. At first it was a disaster in the making but as time grew both Dax and Charlie bonded like no other even after so many trials and tribulations.

“I am I because my little dog knows me”, Gertrude Stein. After a fund raiser for New Tricks and some wonderful discoveries about all the pet parents and their dogs we know who let the dogs out. One year later, all the lives of all the people and their dogs have and are connected in so many ways with some making things official.

I absolutely loved this movie yet of course one thing I could not stand was the couple seated behind me that thought they were home alone instead of in a huge screening theatre so they decided to talk, repeat and foot note the entire movie. I turned around but it did not help. I felt like turning into Godzilla and stomping on them like a small Japanese village. Great direction and writing along with a script that equalizes time focused on the human relationships as well as the dogs in equal time. Who doesn’t like dogs and of course if you do you will love this film. It has a lot to offer the audience and covers so many circumstances that are all true to life both happy and sad. I hope the potential audience will go out to their local theatres and plan on seeing this wonderful film.

I have always been a fan of Dobrev ever since her role in the “Vampire Diaries” and she does not disappoint here. It seems this type of genre, comedy, drama, romance is right up her alley. Hudgens is like the girl next door, sweet and innocent, with brains and brawn to match. Nice to see Longoria in a wholesome story especially in a role that she does not have to expose her sexuality to do a nice job with her character. Pally is hysterical, Lennon a small but good supporting character for St. Clair to work off of when needed. Bass a bit goofy yet with a heart of gold and Cephas Jones who every time he hears someone at his door he pray for Mable. Cassidy is the man that looks good on the outside but is quite self-centered on the inside. I know one or two of those and they’re not fun! As for Corddry he shares a small section of the pie but either way he was great. A number of supporting characters and a large group of dogs will satisfy your needs for a great pleasant movie sure to touch your hearts. Go see it.

More in this category: « Mamma Mia! Here We Go Again The Meg »
back to top