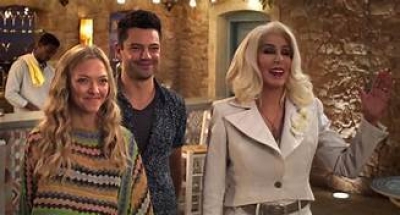 Sophie (Amanda Seyfried) is determined to reopen the hotel, Hotel Bella Donna, named in the honor of her mother Donna (Meryl Streep) who died about a year ago. Sophie has been getting everything ready and just right while her boyfriend Sky (Dominic Cooper) is considering taking a new job in New York. Meanwhile the film goes back in time to 1979 when a young Donna (Lily James) is graduating from Oxford and ready to venture off into the world to see adventures and as life would have it three young men, Sam (Jeremy Irvine), Bill (Josh Dylan) and Harry (Hugh Skinner). In present time these men, Sam (Pierce Brosnan), Bill (Stellan Skarsgard) and Harry (Colin Firth) are all father to Sophie.

Currently Tanya (Christine Baranski) and Rosie (Julie Walters) have landed safely by ferry at Hotel Bella Donna. It seems that they have taken a liking to the hotel manager Fernando (Andy Garcia) and hope to see much more of him later. A young Donna has arrived at her destination, the old rundown hotel up in the hills and when given the opportunity to stay there for free as long as she cleans it up she has nothing to lose but maybe gain, especially a horse. She also found a job singing in a local pub and a young Tanya (Jessica Keenan Wynn) and a young Rosie (Alexa Davies) have come for a visit to join her on stage to sing together. So in 1979 a young Donna is settling down in Greece, maintaining and working to bring a hotel back to life and dating three young men, and later becoming pregnant of which the baby will be named Sophie. Presently Sophie is working to reopen the hotel, spend time with her three fathers and break the news that she is currently pregnant.

A true statement is made during the film, ‘you can judge people by how they treat animals’, so true. Well the grand reopening takes place and much to everyone’s surprise Grandma Ruby Sheridan (Cher) shows up and makes a grand entrance to celebrate the opening, her granddaughter and the opportunity to rekindle a song and dance with Fernando. Nine months later time to climb the hill to church for two blessed occasions the baptism of Sophie’s baby and the spiritual presence of Donna.

I really enjoyed this film and liked the way the director and writers took the story by showing us a seamless version of the lives then and now of Donna and Sophie and all the people, places and happenings that took place in their lives to make them who they had become and why. It is none stop music and dance that will have you singing along to ABBA and so many of their wonderful songs. There is never a dull moment in the film it is bright, cheerful, fun and just one big party for the most part. Great costumes and some wonderful back drops all attribute to a wonderful sequel well worth seeing on the big screen.

James is absolutely fabulous and I loved her as playing the young Donna she was pure perfection. Seyfried looked very different to me for some reason but all in a good way a matter of fact I liked her more in the this sequel than in the original. Streep plays a very small role but as always does it well. Cooper plays Seyfried’s partner and truly does not disappoint. Brosnan, Skarsgard and Firth are all classic and the young men Irvine, Dylan and Skinner are quite good in their roles but the older actors outshine them somewhat.   I love Baranski and Walters and Keenan Wynn and Davies who play their young parts are just as good. Garcia plays a somewhat quiet role and as for Cher well she knows how to make an entrance. Fun, music and dance with a great story line all add up to a must see Mamma Mia 2.

More in this category: « The Equalizer 2 Dog Days »
back to top

We have 786 guests and no members online