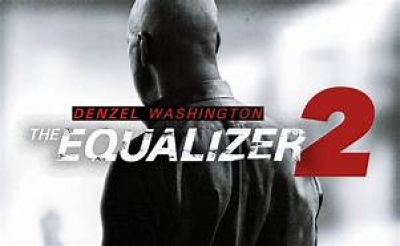 Review written by Daisey Charlotte with 4 out of 4 paws

The Equalizer 2 is the sequel to The Equalizer which was released in September of 2014 and grossed $192.3 million dollars worldwide at the box office. Obviously the biggest concern when going into a sequel is that it won’t stand up to the hype and fail in comparison to the first one.

The Equalizer tells the story of Robert McCall (played by Denzel Washington) a retired black ops agent that makes a promise to his late wife to settle down and lead a normal life. He befriends many of his coworkers at his new low-key job at Home Mart, as well as a teenage prostitute who frequents the same diner. When she takes a beating at the hands of her pimp, McCall breaks his promise and begins taking care of business, one bad guy at a time.

The Equalizer 2 picked up right where the first one left off. I dare to say that the second one was even better. I really liked The Equalizer but it was a little slow in the beginning building the storyline. The Equalizer 2 jumps right in with a very intense train battle between McCall and a scumbag who kidnaps his daughter out of the country, separating her from her mother. Let’s just say that doesn’t end well for the kidnapper. Many other wrong-doers meet the same fate if they mess with anyone that McCall comes in contact with. Robert’s old CIA friend Susan Plummer (Melissa Leo) and her husband Brian (Bill Pullman) return in the sequel but things go awry quickly when Susan begins investigating a murder.

I was on the edge of my seat throughout the majority of the movie but the ending was even more intense than I could have imagined.

Denzel Washington continues to provide a charismatic performance that somehow seems believable, even though he is just one 60 year old man fighting off younger, highly skilled, armed men four at a time. The cinematography was great, with a little bit of a video game feel at times. It had just the right amount of gore to it. It’s impossible to pull off a movie like this without any blood and guts but it wasn’t overdone, which was good.

Neither returning director Antoine Fuqua or Denzel Washington have ever done a sequel before but they said fans of the first film would come up to them on the street and ask if there was going to be a sequel, and I’m not surprised because the characters are so well developed people become genuinely interested in what happens next. This movie captivated me from the very beginning which is hard to do. I would highly recommend going to see The Equalizer 2 when it comes out July 20 (and go rent The Equalizer if you haven’t seen it. I don’t think that you have to see the first one to know what was going on in the second one but they were both good so why not!) I give The Equalizer 2 all 4 paws!

More in this category: « Skyscraper Mamma Mia! Here We Go Again »
back to top

We have 365 guests and no members online