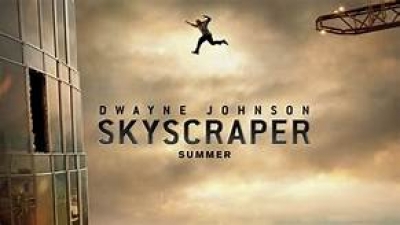 Ten years ago in Minnesota a hostage situation went bad causing FBI Hostage Rescue Team leader and U.S. war veteran Will Sawyer (Dwayne Johnson) to lose his leg. Present day in Hong Kong, Zhao Long Ji (Chin Han) has built the tallest building in the world known as the Pearl. High tech, high security system and beautifully constructed the Pearl soars into the sky and Sawyer can control security from afar on a tablet with face recognition given to him by Zhao. Since Sawyer is in charge of the state of the art security system Zhao has moved Sawyer’s family into the 96th residential floor in which they are the only family currently living there. Sarah (Neve Campbell) his wife with a strong military background, daughter Georgia (McKenna Roberts) and young son Henry (Noah Cottrell) all have recently encountered a strange meeting with two strange men but after a while they went on their way with hesitation.

Not to soon thereafter the 96th floor was a blaze and Sawyer is out running from the bad guys and the police so it seems someone has labeled Sawyer as the arsonist and people are after him. What the bad guys want is his tablet and the police want him since he is a suspect in the outcome of the Pearl fire. After a brutal fight with his buddy Ben (Pablo Schreiber) and finding out that his family is trapped in the burning building Sawyer must escape the police and the bad guys to get back into the Pearl to rescue his family and boy I can say he does so with several unconventional methods. Yet all is not complete since now he must get the family out, clear his name and battle Kores (Roland Moller) the main bad guy out for Zhao’s secret device that holds important information, names and accounts of some very wanted criminals.

The film is well written and directed well with some cliché moments straight from the Die Hard films and The Towering Inferno. It does not take long before the action kicks in and Johnson surely knows how to work a screen. Some absolutely amazing special effects and use of green screen keeps you on the edge of your seat for a man trying to save his family. I mean the action scenes were a bit unreal meaning I can’t imagine someone attempting such dangerous acts over 96 floors high in the sky but albeit they are entertaining and exciting to watch.

Johnson once again does not disappoint and works his character with belief and a lot of action. Good to see Campbell since her “Scream” days, she really does a good job with this role especially when her characters military background comes out in some scenes. No complaints about Roberts and Cottrell they were a good casting pick to play the parts of their children. The rest of the cast gives the story a powerful support that should launch this film into a successful summer box office number.

More in this category: « Solo: A Star Wars Story The Equalizer 2 »
back to top

We have 517 guests and no members online