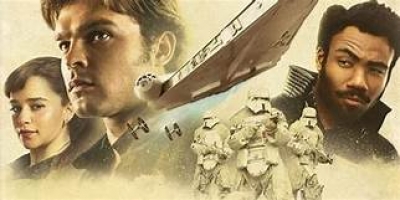 In a galaxy far far away it is lawless times on Corellia of which Lady Proxima (voice of Linda Hunt) is running things especially the children. Han Solo (Alden Ehrenreich) has just stolen some Co-Axium of which he shares the news with his girlfriend Qi’ra (Emilia Clarke) but Lady Proxima wants it. Hans tries to lie his way out of the deal but soon is on the run with Qi’ra trying to make it to another planet but things don’t quite go as planned.

Three years later, Hans is in a war and has one thought in mind to get back to Corellia and find Qi’ra. He befriends Tobias Beckett (Woody Harrelson), Val (Thandie Newton) and Rio Dureant (voice of Jon Favreau) whom are all part of the same battle only these three are a group of illegal scavengers out to line their own pockets. After Hans breaks out of a mud pit where he ironically joins forces with Chewbacca (Joonas Suotamo) they both try to join forces with Beckett. Next stop for all five of them is to take over a train and steal a load of Co-Axium which is an extremely valuable source of power. In a jaw dropping fight to take over the train the five have entered into a new three way battle this time with a group of Pirates who are out for the same Co-Axium. In the end only three of the five survive and when they show up with no product they have to explain themselves to the holder of their contract, Dryden Vos (Paul Bettany) and this is where Hans meets Qi’ra, which is not necessarily a good thing. Qi’Ra is the top lieutenant to Dryden Vos’s army.

Dryden gives the guys another chance to make good on their contract and in order to do so they must break in to the vault on the lowest level of a mining location which is heavily guarded. In order to do so they need a fast ship so Hans sits in at a gambling table with player Lando Calrissian (Donald Clover) an avid gambler who happens to own the Millennium Falcon. Hans is now working with Lando and his right hand robot L3-37 (Phoebe Waller-Bridge) along with Beckett, Chewbacca and Qi’ra in a battle to get the Co-Axium get it refined and pay off their debt to Dryden Vos. During this final journey Hans must learn never to trust anyone for he could easily be betrayed by somewhat predictable people but if he finds their weakness it just may leave him smiling in the end. In the final goodbye we learn just who to trust and not to trust which may or may not be a surprise.

I always like the work of Ron Howard and overall he did not disappoint me nor did the writers. When the story first begins I did question some of the CGI and the two leading characters but ten minutes in that all changes. I enjoyed the story line which kept my attention for two hours. We learn how Hans gets his last name, how he officially meets Chewbacca and also where the Millennium Falcon rises from. There are many other cool looking creatures in this story which I liked since in the past two films I thought it lacked that element. A great score and some awesome costumes along with special effects and relationships good and bad and this story all worked for me.

Many people I heard were questioning Ehrenreich as Hans but you can’t compare him to Harrison Ford since he is the ultimate Hans and always will be but Ehrenreich does a nice job with the story. Clarke is great as Qi’ra and really holds her own almost better than her leading man. I love Chewbacca and Suotamo does not disappoint. Harrelson has come so far since “Cheers” and proves once again he can conquer any role. Glover I would have liked to see more of and although Newton is short on screen time she too is quite the supporting character. Bettany plays evil well and Waller-Bridge is a hoot so overall I was a fan of this Star Wars Story and if you don’t read into it too much I think you will be too.

More in this category: « Deadpool 2 Skyscraper »
back to top

We have 399 guests and no members online