Pope Francis: A Man of His Word Featured 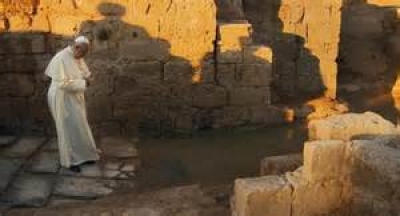 This documentary follows Pope Francis around the world as he speaks to the people about all the issues that affect them personally and globally. He mentions time, that no one person has control of it. The world is changing in front of us every day and not for the better. It seems to move quicker as every day goes by. One hundred fifty species die every day because of our actions on earth and for most people they don’t even realize the fact or seem to care. There has to be a balance for us all to live in peace. Years ago during the life of St. Francis he was praying to Jesus on the cross when a voice spoke to him and asked him to restore his house, from that moment on St. Francis lived in poverty and led his life as a caretaker to man, animal and the environment. Something mankind of today has lost sight of!

Traveling from Argentina to Italy Pope Francis, a name he chose, has stated to all that as long as a church relies to exist on wealth than there is no God. We must all share in the wealth of our world so that the young people of today can grow and survive in dignity. He mentions the 3 T’s which in the English language stand for work, land; roof, all of what mankind needs to achieve their goals for survival. Mother Earth is constantly abused and as long as we continue to clutter our oceans, lands, and air with garbage and pollution our days for survival are limited and as for the animals that walk this land we are their caretakers, not their masters. Like St. Francis we need to be the shepherd to the world.

Man must realize that God gave us one day of rest and we should always take that one day no matter what day for complete rest and enjoy our surroundings that we probably otherwise never pay attention too. Whether gay or straight we are all God’s people and must learn to adapt and get along with each other, God loves us all. As for abusers of children he has zero tolerance and if a priest is such an abuser they should be cast from the church for such abuse of a child leaves them alive but destroyed for life. We all die a little bit each day and we must not forget the fact that God is forever eternal not us. He discusses the death of a child, the immigration of migrants that look for a better life and that 20% of the world’s population are wealthy leaving 80% to suffer and struggle for survival.

As he speaks to the United States Congress he points out the all-important command, do on to others as you would do onto yourself, but was congress truly listening or were some of the tears shown only part of their distraction for the public. Why do people have to have weapons? It is only possible by the use of money drenched in blood. We are all brothers of Abraham, it does not matter if we are Catholic, Muslim or Jewish, God loves to see all of us together not with his eyes but with his heart. In the political world today the misuse of power will surely kill us all. We strive for light to overcome darkness and in the end we all need to smile and have a sense of humor for without it we are nothing.

I must say I absolutely enjoyed this documentary and personally agreed with at least 99% of what the Pope discusses which is so much more than I mention above. He is an authority figure, a mentor, a caretaker that we all should follow because if we don’t than most likely we will all fail and pass away at being human. Even though some of the direction and writing at times seems a bit over-edited the content is key in this message which is presented in English and other languages with sub-titles of course. I wish he would run for office since Pope Francis is truly a wise man that honestly cares not of money and power but of the people, all the people that share this place called home. This is a film that everyone should see but most probably won’t which is a shame since these spoken words from Pope Francis can truly help save our world.

More in this category: « Book Club Deadpool 2 »
back to top

We have 396 guests and no members online