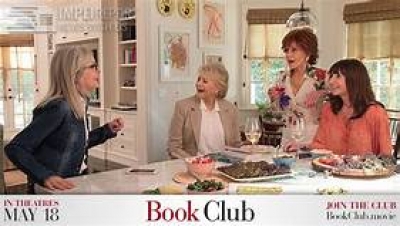 Paramount Pictures, Apartment Story and June Pictures present a PG-13, Comedy, directed by Bill Holderman, written by Holderman and Erin Simms with a theatre release date of May 18, 2018.

This is the story of four women during their golden years of life. Diane (Diane Keaton) living in California lost her husband in the year passed, she raised two daughters who are grown and living in Arizona, Adrianne (Katie Aselton) married to Scott (Tommy Dewey) and Jill (Alicia Silverstone) who is single. Vivian (Jane Fonda) a sexual and eccentric hotel owner who at one time dated radio host Arthur (Don Johnson) and may again since he once again has shown up in her life. Sharon (Candice Bergen) is a Federal Judge, divorced from her husband Tom (Ed Begley Jr.)who is now engaged to a very young Cheryl (Mircea Monroe) they have one son who is also engaged to his girlfriend. Last but not least Carol (Mary Steenburgen) a restaurant owner married to Bruce (Craig T. Nelson) but for the last several months Bruce has lost his mojo and Carol is very concerned if it’s her.

Every month the woman meet to catch up and read a new book, hence the “Book Club” but this time their reading has taken a turn as they begin to read the trilogy of “Fifty Shades of Grey”. As the four read on their lives begin to change Diane starts to date a pilot, Mitchell (Andy Garcia), who happens to live in Arizona like that of her daughters. Vivian has started to date and rethink her life with the possibilities of including Arthur. Sharon has gone on Bumble in search of dates, George (Richard Dreyfuss) and Dr. Derrick (Wallace Shawn) and finds out that the internet has the effect of curiosity to say the least on her mind especially after not having sex for 18 years. As for Carol she is still trying to relight that flame between her and her husband but drugging him may not be the best answer.

In the end, reaching out to millions of people is not the same as reaching out to the one you love and love is just a word until someone gives it a meaning. Albeit choices are made for better or worse but all they ever really wanted was to be happy at their age.

I absolutely enjoyed the film and found myself laughing quite often but also as I too am getting older I was able to pick out some good advice about life and love. The film is nicely directed and written with a lot of one liners that fly by with some unheard due to the laughter in the theatre. The film is somewhat predictable and has been done many times hence the “Golden Girls” and several other television and films about women and their issues of life, love, men and sex. A great soundtrack along with some wonderful scenic views of Arizona enhances this story but overall it is the four leads that obviously lead this film.

Keaton, Fonda, Bergen and Steenburgen have definitely gained some years under their belt but that does not stop them from acting young, fun and full of love. Garcia and Johnson are looking good in their older years and help to spice up the story line. Nelson adds a bit of drama but more so some romantic and hysterical moments. Silverstone, Dreyfuss, Begley Jr., Shawn, Dewey, Aselton and Monroe are all in the supporting cast and they all do a good job of making this film worth the movie ticket at the theatre. I am sure many women will see this film which they should. One cast member not to forget is Ginsberg the cat, having cats of my own it was great to have a feline star among the cast and by the way she was purrfection.

More in this category: « Life of the Party Pope Francis: A Man of His Word »
back to top