Life of the Party Featured 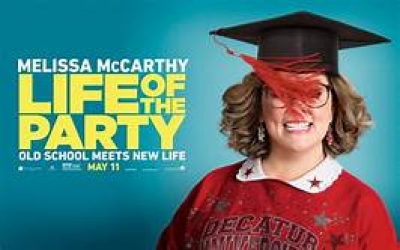 Warner Bros. Pictures, New Line Cinema and On the Day Productions present a PG-13, 105 minute, Comedy, directed by Ben Falcone, written by Falcone and Melissa McCarthy with a theatre release date of May 11, 2018.

It’s senior year at Decatur University for Maddie (Molly Gordon) as her parents Deanna (Melissa McCarthy) and Dan (Matt Walsh) drop her off for her final year of college. Little does Deanna know that when they pull away from the school Dan has some special news to share with his wife. He’s in love with the local realtor, Marci (Julie Bowen) and he wants a divorce. Twenty three years of marriage thrown away and nowhere for Deanna to go so she uber’s to her parents’ home for some comfort and hopefully rational plans on what to do next.

Deanna had dropped out of college with one year left because she became pregnant with Maddie so she never finished her archeology degree. Now she thought would be the perfect time to go back to school and where better than the same school her daughter is attending. When she breaks the news to Maddie about the divorce Maddie is unsure at the moment what was worse that her parents are divorcing or that mom is joining her at school. Go Tigers! Deanna moves into Dumas Hall, meets her very dark and mysteriously weird roommate Leonor (Heidi Gardner) and settles into classes sporting the latest in mom’s wear. Not such a good look if she plans to fit in with the younger generation. Thanks to an invite to a frat party by her daughter and her sorority girlfriends, Helen (Gillian Jacobs), Amanda (Adria Arjona) and Debbie (Jessie Ennis), Deanna becomes DD with a whole new look that apparently works for her since she later becomes the sexual interest to college boy Jack (Luke Benward). Deanna’s best friend Christine (Maya Rudolph) loves the news and all I can say is that it’s a small world after all. You’ll understand what I mean when you see the film.

Life for Deanna at school seems to be going well, parties, a new look, a young good looking sexual partner and the acceptance from her daughter and friends. She does have some rivals like the mean girls led by Jennifer (Debby Ryan) but overall it’s a good experience that is until the day she becomes a wedding crasher and her world tumbles once more leaving her with doubt of finishing college and getting her degree but thanks to a very well-known singer (Christina Aguilera) there could still be hope for survival.

The movie plays a bit long for some reason making me feel I was sitting in the theatre longer than I actually was. It has its very funny moments some laugh out loud and some chuckles but over all its well-directed and written. It has its predictability, cliché moments and some familiar territory from other films but in the end I’m still a fan of McCarthy. It kind of gives some hope to the older generation to never give up your dreams no matter how old you are which in work and love age is truly just a number and should never be a judgement. The film has a great soundtrack with some great music from the 80’s as well as some familiar throwback moments to some great dance moves as well.

McCarthy controls this entire story from start to finish with some assistance from her support team of Gordon, Jacobs and Ennis along with some interesting and funny moments with Gardner. Bowen does a nice job with a small role as does Walsh but hats off to Benward that plays her sexual interest. Rudolph is always fun to watch and continues her streak here and Ryan plays the number one mean girl pretty well but it is Razzle the dog that stole his scene when he almost loses his life. Albeit I enjoyed the film, thought it was a good story and it will surely have you laughing several times throughout from start to finish.

More in this category: « Breaking In Book Club »
back to top