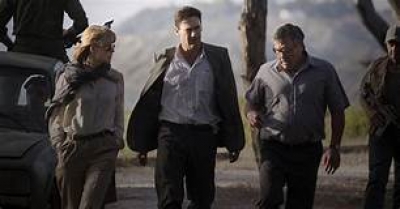 Mason Skiles (Jon Hamm) and his wife Nadia (Leila Bekhti) are living life in Beirut and one evening at a social gathering at their home the CIA and U.S. government has decided to pay them a visit. Why? It seems a young boy, Karim, which the couple has brought in to live with them, has been lying about his past and present, hiding the fact that he has an older brother, Abdul that is in the middle of the civil unrest in the war torn Lebanese country. When things go wrong and Nadia is killed in a confrontation in their home Mason leaves Beirut to work in the private sector doing what he has done for years for the CIA, a negotiator.

Years later in the 1980’s Mason is approached by the CIA once again to return to Beirut. It seems his friend and past associate Cal (Mark Pellegrino) has been taken hostage by a now much older and knowledgeable terrorist, Karim (Idir Chender). After some coaxing Mason has decided to return to Beirut in hopes of helping his good friend although he questions if the CIA is interested in rescuing Cal or the years of information he holds in his head.

Posing as a University Professor Mason once again is back in Beirut since his wife’s killing. He is met by driver Bernard Teppler (Johnny Coyne) and later CIA operative Sandy Crowder (Rosamund Pike) along with Gary Ruzak (Shea Whigham) who is not one of Mason’s biggest fans. When Mason comes face to face with his past he is given a choice of an exchange, Cal for Abdul. One big problem, no one knows where Abdul is hidden, wondering if Israel plays a part in his whereabouts, Mason is on a timely journey to find Abdul and make the exchange before it is too late. Promises, old and new friendships, money, guns, death, war and taking chances are all part of the game and Mason realizes just how difficult it is to trust anyone.

I enjoyed this mystery thriller that is somewhat a simple and predictable story. It definitely kept my attention especially watching much of the background photography of what is Beirut and the horrific results of mankind’s stand of greed and power. A great score with some thrilling moments help to move the story along but I felt that not so much the direction but possible at times the writing fell a bit weak. Yet overall I did enjoy the film and the work done my Hamm who of course is the lead and featured actor from start to finish. Pike is a good support to Hamm and truly holds her own in a war surrounded by mainly men. Pellegrino does not get a lot of screen time as well as many other characters but Chender does nice work as the man behind the curtain so to speak. A decent story with some thrilling scenes all lead up to making this film worth the watch.

More in this category: « Rampage I Feel Pretty »
back to top