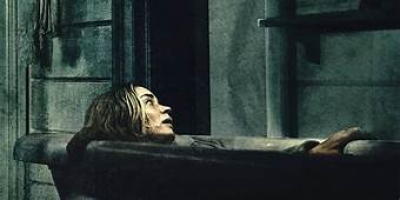 Day 89 and a family of five, father, Lee Abbott (John Krasinski), mother Evelyn (Emily Blunt), daughter Regan (Millicent Simmonds), oldest son Marcus (Noah Jupe) and youngest son Beau (Cade Woodward) are back packing through the countryside when they set upon a deserted town. No people, dust everywhere, not a sound to be made, not even by the Abbott family, a matter of fact they use no words and don’t even wear shoes. Our planet has been taken over by creatures that cannot see you but they have impeccable hearing so any noise you make they will quickly find you and kill you.

There is tragedy in the Abbott family before they make it to their destination but through the pain they carry on with their lives. Evelyn has become pregnant and in the mountain sides they know there are other people seeking shelter since at night they all light fires. Whether human or animal, if you make a sound louder than the sounds around you then consider your life over.

On day 473 since the invasion Evelyn is only three weeks now from giving birth and as we all know a baby has a way of crying when born and for Evelyn and the family this birth turns out rough for them all. The lands around the family are beautiful farm lands, gorgeous for miles, you would never suspect any kind of danger lurks in the countryside but it does as well as the suburbs and the cities. Regan is deaf so the family understands sign language but her father has been trying is best to create a hearing aid for her so that she can pick up some type of sounds. Even though Regan felt unloved by her father for what previously happened she rejected the device but later discovered the value of it. Lee would spread sand on the trails to make it easier to walk around on and of course make less noise to be heard by the creatures. If only things were that easy but they were not. In the end it took love and sacrifice that led to the discovery of the creature’s weakness but is it too late?

I absolutely loved this film. I am a huge horror fan and this movie was spectacular. Who would have thought that sub-titles, sign language and body gestures would carry a film such as this but it does and more. I sat on the edge of my seat most of the time and jumped through the back of my seat at least four times which is a milestone for me since most horror/thriller films are all the same. This one is not, its original in so many ways and the quiet sounds being over-taken by loud occurrence out of nowhere only help to make this film intense along with a great score. The creatures are pretty original as well and so well done visually with special effects. I must say 90 minutes was not enough for me in this story I wish it was actually 30 minutes longer. I predict it will do well and that not too far around the corner there may be a sequel. I hope so! I could watch this film over and over again especially since it incorporates old school horror.

As for the cast it is very small but the story is done so well that it does not need anyone else. Blunt was spectacular, Krasinski perfection and as for the kid actors well just say congratulations to the casting department. Even the old man in the woods (Leon Russom) who doesn’t say much also made this film intense. Hats off to Krasinski for bringing something original finally to the horror genre. As for the animals in the film, fish, birds and well if you like raccoons turn your heads away from the screen.

More in this category: « The Miracle Season Rampage »
back to top

We have 668 guests and no members online