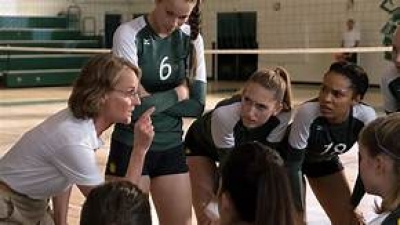 Based on a true story this film reveals the tragic death of Iowa West High School volley ball team Captain Caroline “Line” Found (Danika Yarosh) and how her best friend Kelly (Erin Moriarty) and the team of girls are able to overcome their grief and hopefully carry the team to another victorious year. The team won the championship last year in 2010 and under the wings of the coach Kathy Bresnahan (Helen Hunt) and assistant coach Scott Sanders (Jason Gray-Stanford) they hope to win in 2011 but the tragic loss of the teammate and friend Caroline has set them back emotionally unsure whether to play again.

Caroline’s father Ernie (William Hurt) is dealing with his daughter’s loss and shortly thereafter the death of his wife Ellyn (Jillian Fargey). Ellyn’s life was expected to end due to an illness but to lose not only his wife but his 17 year daughter as well was worse than tragic. Ernie wanted the team to play as did the coach and the school but it took Kelly as the new center to bring the team together even when the team felt she was not good enough for Caroline’s position on the team. Through love, family, dedication and a new motto to “Live Like Line” the team is back and winning but the big question is can they win 15 out of 15 games left in the season which will take them to the finals and if they make it to the finals are they good enough to become state champions for 2011 which would make them the only team to win 2 years in a row. Hopefully with “Line” watching down on them the women of Troy has a chance.

I must say the film truly works well in the sports genre because watching some of the competitions was some of the best parts of the film. The story focuses on the life of Caroline but also the team and their hopes of playing for Caroline in the 2011 championships. I would have liked to see a bit more of the side stories like her mother Ellyn, the siblings that come and go so quickly and the relationship between Kelly and the new boy in town who by the way Caroline introduced Kelly to. I’d say it’s a great film for television and it plays well on the big screen but I’m unsure if it will reach a wide audience there unless the schools across America promote it along with the religious groups since some moments reflect on the church. There really isn’t anything necessarily bad with the story except some holes and character development but it will grab your heart and will probably make you cry if you’re an emotional person or have lived through something similar. A great soundtrack, a family dog on a farm, inspiration and the will to live are also nice positives about this film.

Yarosh is inspirational in the short time in the film, the girl that works hard to make everyone smile. Moriarty is the best friend who struggles not only with Caroline’s death but also her volley ball team and game. Hunt has definitely aged since I last seen her in a film but she represents her power as an actress in this role. Gray-Stanford is a nice support system to Hunt and the young actresses that play on the volley ball team all bring justice to their characters but it is Hurt that along with Moriarty that own this story and bring on the drama and emotions that most would expect from the unjust death of a young 17 year old with so much in life to give and live for. I enjoyed the movie and think it is the perfect family film as well that will definitely open up several discussions about life and death within the entire family circle and hopefully show kids there is no “I” in team.

More in this category: « Blockers A Quiet Place »
back to top

We have 876 guests and no members online