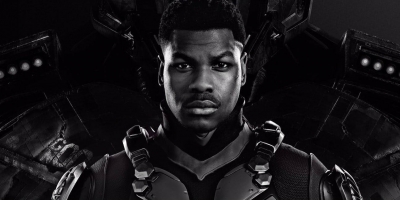 It’s been ten years since humans and their Jaegers won the war against the Kaiju. Jake Pentecost (John Boyega) who lost his father in the war was once a ranger but decided to get out and lead a life as a scavenger on the streets in California. That is until he meets Amara Namani (Cailee Spaeny) a young woman who as a child lost her entire family in the war, she now has been spending her time constructing a mini Jaeger known as Scrapper. It seems that after a fight with authorities and a much larger Jaeger both Amara and Jake have been given a choice, jail or pilot academy in China. Of course jail was out so both Amara now cadet Namani and Jake and old ranger now back in the business again and reunited with Nate Lambert (Scott Eastwood) are part of the good guys out to protect the world.

Dr. Hermann Gottlieb (Burn Gorman) a bit of an odd but quite intelligent scientist is experimenting with Kaiju blood as a way to battle the beasts with more force should they return. Liwen Shao (Tian Jing) of Shao Industries is now in control of mass producing Drone Jaegers with the help of Dr. Newton Geiszler (Charlie Day) and she has cut Dr. Gottlieb out of the equation. It seems a rogue Jaeger has entered Sydney Australia and both Jake and Nate are sent to battle this unknown force that came out of nowhere.

Jake’s sister Mako Mori (Rinko Kikuchi) who happens to work with the government is on site in Australia but when her helicopter is hit with enemy fire it is up to Jake to try and rescue her. In their search to discover who are behind the rogue Jaeger the Drones from Shao Industries have now all turned rogue with one intention, to destroy the world. No one knows how or who is behind this horrific act but Jake, Nate, Amara and a group of rookie cadets all know they have to do their best to save the world but what happens next is totally unexpected as they all must fight the largest, strongest and most horrifying Kaiju known to mankind. If they don’t stop this creature and its creator in time it will surely destroy the entire planet.

I absolutely enjoyed this film which is a cross between Transformers and Godzilla which ironically was filmed partially in Japan with a number of Japanese casualties. The film is beautifully directed, written and photographed with a build up to the final battle which will rock your socks off. I wish I saw it in IMAX 3D since this film is ideal for that experience but even though I watched it on a normal sized screen without 3D it was still awesome and very much worth the box office ticket. Great battle scenes, the special effects are superb and a perfect score all add up to what should be a big money maker for Universal. Look for this action packed adventure to dethrone “Black Panther” from the #1 slot at the box office.

I was previously not a big fan of Boyega but after experiencing him in this role I am now. Eastwood not as much, he looks so much like his dad but I thought his acting skills in this film took a slight step back compared to his fellow actors like Spaeny who was brilliant even during those slow motion scenes. Gorman is quirky but it works for him especially in the elevator scene which was hysterical. Day is a bit obnoxious but plays it well, Jing a bit of a bitch until she lets her hair down and Kikuchi even though she has a small role she owns it. There are a number of cadets Karan Brar, Wesley Wong, Ivanna Sakhno, Machenyu, Lily Ji and Shyrley Rodriguez that all contribute to this action packed adventure that will keep you engulfed for almost two hours. Pacific Rim Uprising is much better than the first and also more so than Transformers and Godzilla by the way.

More in this category: « Unsane Midnight Sun »
back to top

We have 549 guests and no members online