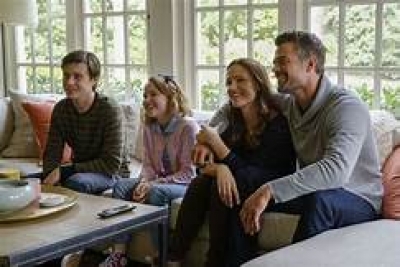 Simon Spier (Nick Robinson) is your typical seventeen year old high school student who lives a normal life in a normal home with his parents Emily (Jennifer Garner) and Jack (Josh Duhamel) their family dog, Beaver, and Simon’s little sister Nora (Talitha Eliana Bateman) who aspires to be a great chef one day and now experiments recipes on her loving family. Simon is not the most popular kid at school but he is well known and has a core group of friends that he hangs out with during and after school, Leah (Katherine Langford) his best friend of 13 years, Abby (Alexandra Shipp) little miss Wonder Woman new to the neighborhood, Nick (Jorge Lendeborg Jr.) sports player with a crush on Abby, Bram (Keiynan Lonsdale) another jock and new to the group but a bit obnoxious Martin (Logan Miller). Mr. Worth (Tony Hale) is the eccentric and over the top Principle and Ms. Albright (Natasha Rothwell) is the cool but sometimes over-stressed drama teacher.

Life could not be any more normal for Simon except for one big secret, he’s gay, and he has no idea what to do about it. At school Ethan (Clark Moore) is already out of the closet some may say way out and he is constantly bullied about it. Leah hears that another student has been exposed as gay but no one knows who it might be. She calls Simon to tell him which causes him to freak out that it may be him. It’s not but when he finds out an email for this person known mysteriously as Blue he decides to come out to him on line but under the pseudonym as Jacques. They strike up a friendship on line chatting often but unaware of whom the other person really is but when Martin finds out he blackmails Simon for a huge favor. Simon agrees against his will but he is not ready to come out to his family, friends and school. He knows by helping Martin he could possibly be hurting others but he feels cornered.

Simon spends his days trying to figure out exactly who is Blue and whether it is someone he knows in person or possibly an acquaintance either way the conversations between he and Blue made Simon feel safe and loved. They say everyone deserves their own love story and so does Simon deserve his but only time will tell. Life takes a rough turn for Simon thanks to a recent bear attack so to speak. Who said being gay was easy? There is one golden rule though and it’s not too out someone and take away their choice of when, how, where and to who a gay person wishes to tell that they are gay. Many people even in this day and age can be very judgmental and hurtful to a person that they do not even know. A baby is born innocent but it grows up for the most part learning from its surroundings and if those people, places and things that affect them as they grow are filled with bigotry, hatred and just plain ignorance there is a good chance that innocent child will grow up the same. The truth hurts for many but for some maybe not! Yet for Simon it was his time to exhale. Secrets hurt people but if they are true friends and sincerely love you they will come back to you no matter if you’re gay or straight. In the end 4 coffees became 1 but thanks to forgiveness, love and Blue, life is once again great with 5 coffees.

I absolutely loved this film and believe it should be a must see not only for the young generation but the middle aged and old as well. It is real, touching, funny and sad with a number of twists and turns to keep your attention from start to finish. It reminded me a bit of the films from the 1980’s with Molly Ringwald and the core group of young actors from back in time but only modernized. The journey of Simon’s life is not thrown in your face but rather outlined in reality and although it was wonderful to hear a packed theatre clap at the end I was still able to hear a grunt or two from those babies that grew up in life never able to form their own opinion but rather grew up with the scars of their parents, their religion, their lifestyle that is filled with hate rather than love.

Robinson does an excellent job in this story as do all is fellow actors that portray his core group of friends. Even though Miller tends to be quite obnoxious at times he plays his part to perfection. It is always good to see Garner who tends to take on roles with a vital story to tell the audience. Duhamel is strong as the father who realizes that sometimes jokes can affect people even those closest to us. Overall the film has a great message and does a superb job of making you try to figure out just who the heck is Blue and will this person ever take a ride on the Ferris wheel?

More in this category: « A Wrinkle in Time Tomb Raider »
back to top

We have 634 guests and no members online