A Wrinkle in Time Featured 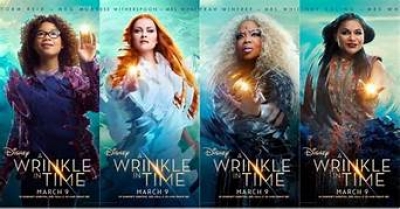 A Wrinkle in Time

Love is never gone it’s just folded sometimes. Mr. Murry (Chris Pine) is a NASA scientist and he and his wife (Gugu Mbatha-Raw) were working on an advanced possibility of travel throughout the universe presented to associates at the Center for Advanced Space Technology. The only problem most of the associates laughed at his ideas to unlock the secrets of the universe. Yet while working from his home he discovered an entry way which locked him in time for over four years.

Meg (Storm Reid) is constantly bullied at school so much so that she lost hope in the good in people except for her mother and little brother Charles Wallace (Deric McCabe). When Meg takes her anger out on Veronica (Rowan Blanchard) and Charles Wallace takes his out on the teacher both siblings end up in Principal Jenkins (Andre Holland) office. All Meg wanted was her father and the world to be bright once more.

Suddenly a strange woman who calls herself Mrs. Whatsit (Reese Witherspoon) appears in the Murry home as a Tesseract with a message for the family. The next day while the Murry kids are walking their dog, Calvin (Levi Miller) a boy from their school shows up unexpectedly and joins the two in their walk where they soon come upon Mrs. Who (Mindy Kaling) who also has a message for all three of them. Love without love is like a tree without fruit. Once back home all three of the kids are once again visited by Mrs. Whatsit but this time Mrs. Which (Oprah Winfrey) appears as well. It is from this time forward that the three children with the help of the three women go on a mystical journey through time to find Mr. Murry.

They enter so many different realms; meet the Happy Medium (Zach Galifianakis), all beautiful lands in their own right except for when they meet Red (Michael Pena) who introduces them to The It (David Oyelowo) who survives and grows stronger on fear, anger and violence. It is this realm that may possibly hold the key to their father as well as a way home. It is Meg that must be a warrior, fight evil, have hope and trust no one but endear the three gifts she was given by the three women in order to save not only her father, brother, Calvin and mankind but also herself.

I loved the entire message wrapped within this story but the writers fell a bit short. The story tended to jump around rather than flow making it seem like the editing took its toll on the film. The director does a nice jump and the special effects, costumes and score are exceptional but I also noticed that during several scenes which involved special effects and the kids on the run they seemed not to line up from frame to frame. This film could have been a total four out of four if they just took time to tell the tale rather than chop up many of the scenes.

Chris Pine and Mbatha-Raw are not major center pieces other than the story revolves around him but both are sufficient in their roles. Galifianakis although he has a small role is worthy and as usual I’m a big fan. Witherspoon, Kaling and Winfrey are superb although other than Witherspoon I would have liked to have seen a bit more movement in their characters. It is Storm, McCabe and Miller that steal the film. Storm makes you love her from the beginning even more so in the end standing up to what is right. McCabe is just a joy and bright young actor with only one issue which is at some moments in the story it was a bit difficult to understand him, not a lot but a little. Miller will also go far in Hollywood since he has the look, the talent and seems to work well with others. There are some mystical creatures in the story but I was happy to see that the decision makers gave the family a dog.

More in this category: « The Vanishing of Sidney Hall Love, Simon »
back to top