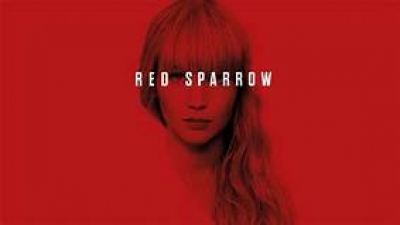 Dominika Egorova (Jennifer Lawrence) is the pride of Russia as the premier dancer in the Russian ballet that is until she happened to break her leg during a live performance. Meanwhile in Gorky Park Nathaniel Nash (Joel Edgerton) is getting a drop off exchange with a Russian mole that is until the police get involved. Three months later Ivan Egorova (Matthias Schoenaerts) persuades his niece Dominika to join him as a Sparrow working for the Russian government under the leadership of Alexei Ivanovich Zyuganov (Ciaran Hinds) and Korchnoi (Jeremy Irons). Her choices were few since she knew the ballet company would not continue to pay her rent and her mother’s medical bills since she could no longer dance. Well that and the fact that if she declined the Russians would most likely kill her.

With no military or intelligence background her Uncle got her enlisted in Sparrow school where she would learn how to use her beauty, strength and abilities to manipulate Americans in order to get secret intelligence from them. She quickly learns that from that moment on her body even though she fought it now belongs to the state. The choices that she makes will involve sex, lies and manipulation that will surely end up in life or death situations. Dominika does have a gift to read people very much the same way her uncle does.

Her assignment was to target Nate the American who works for the CIA in order to find who in the Russian government the mole is. Yet when she meets Nate and passes herself off as a Russian translator working at the Embassy, Dominika soon finds out that Nate has other intentions for her. Dominika knows she cannot trust anyone not even her roommate since secrets are best untold, if divulged they can get her and possibly her mother killed. Caught in a tangled web between the Russians and the Americans, Dominika is faced with many decisions and when she meets Stephanie Boucher (Mary-Louise Parker) during a secret meeting her fate is unfortunately looking to end badly. Tortured almost to death Dominika is faced with more choices that in the end will lead her to a life she would never have dreamed of living with a family member being the main focus of her decisions.

This film is smartly directed and written with a great score and some very compromising situations. Bad language, extremely strong violence, torture, sexual content and nudity are all part of this story. If you turn your head away for a moment to sneeze you then may be lost within the plot. I have a feeling that many people leaving the theatre felt a bit confused in the end but if you pay attention it all makes sense. There are some moments that I felt the transition from one twist to another could have been a bit smoother in the direction of it but overall I found myself intrigued within the life and choices of the main characters.

There are a number of supporting characters but as for the main ones like Lawrence I give her credit, she is all grown up, in many ways, and I tried to listen to hear if she screwed up her accent during the film but she did quite well especially as the lead. There were times I felt she was a little too stiff but then again if you worked for the Russian government you probably would be as well. Edgerton was a nice male lead and surely complimented Lawrence’s character. Schoenaerts was a new face for me and although he played his character a bit softer than others he was still effective to the cause. Hinds and Irons have smaller roles but equally important to the story line. Overall I thoroughly enjoyed this film even though it was over 2 hours it definitely kept my attention. No animals were harmed in this film but I cannot say the same for the humans.

More in this category: « Game Night The Vanishing of Sidney Hall »
back to top