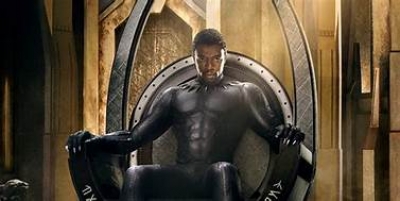 Review written by Jon Patch with 3.5 out 4 paws

A very long time ago a meteorite hit a part of Africa which powered this new world with an element they call vivarium, a source of extreme power that helped the tribes and people of Kawanda to prosper technologically, well above the knowledge of the outside world. In 1992 the current king of Kawanda, husband to Ramonda (Angela Bassett), father to T’Challa (Chadwick Boseman) and Shuri (Letitia Wright) had made a visit to Oakland, California and what happened there would haunt their family in years to come.

Present day, T’Challa leaves the outside world to return to Kawanda to become king that is as long as no one challenges him for the throne. It turns out emerging from the dark caves, M’Baku (Winston Duke) arrives during the ceremony for a challenge. What happens next are lessons learned by both men but T’Challa becomes king. His sister Shuri is a technical wonder and has created not only weapons but the suit her brother wears as the Black Panther, a suit that is virtually resistant to most all forms of weapons.

In London a young African American man, Erik Killmonger (Michael B. Jordan) emerges at a local museum with one thought in mind, to steal a valuable artifact with his partner in crime Ulysses Klaue (Andy Serkis). Later in a local casino in South Korea T’Challa along with Nakia (Lupita Nyong’o) his love interest and Okoye (Danai Gurira) his right hand woman to guard him are in search of the artifact. This is where T’Challa bumps into an old friend from the CIA Everett K. Ross (Martin Freeman), both men are after the same thing but little did they know getting it would be tougher than they thought. Yet when they capture Ulysses thanks to the Black Panther he once again escapes and Ross gets shot. The only way to heal him and save his life is to take him to Kawanda which will most likely expose their hidden world.

A new face has emerged in Kawanda, Erik, and after bringing a gift to the commander of the country W’Kabi (Daniel Kaluuya), his entire intention was to expose the truth of what happened in 1992 and take over the throne as king of Kawanda. A challenge is accepted by T’Challa and later this new king wants one thing out of being in charge and that is to take down all the outside leaders in the world putting him on top and as the new leader he expects all of Kawanda to obey his rules.

In the end, there is no place for a king filled with hatred. Death is better than living a life in bondage. As for the life within Kawanda they discover it is time to share their knowledge with the outside world and overall live as one tribe.

I thought the beginning of the story was a bit confusing but thankfully all the pieces of the mysterious puzzle fit perfectly in place about half way through the story. Coogler does extremely well with the direction of the film which really picks up as it moves forward. The writing is superb with tones of humor mixed in and out of the story as well. The only issue I had at times was understanding a few lines due to the accents of the characters. I enjoyed the score but at times I thought it came across a little over-bearing which tended to over-take the actors. As for the cinematography and special effects they are vibrant and fantastic adding such a thrill to the look of this hidden world. This film moves very quickly even though it’s over two hours long. As usual with all these superhero films stay through the credits to the very end or else you will be disappointed.

I can’t say anything bad about any of the actors they were all spot on. Yet the stand outs to me are Boseman who commands this entire story. Jordan who has come a long way since his early days and kicks some serious butt in this role. Gurira is strong and Freeman being the only standout white man in the story is used as some comedic relief but it works well for the story line. Kaluuya tends to get a bit lost but Wright is quite the entertainer. Good to see Bassett in this film as well as Forest Whitaker but Serkis although I thought his lost arm seemed a bit oddly placed at time he is a crazy character that works his talents well   There are some animals in this film but the stand out ones are truly the Rhinos that look awesome and work well within the story.

More in this category: « Early Man Annihilation »
back to top

We have 529 guests and no members online