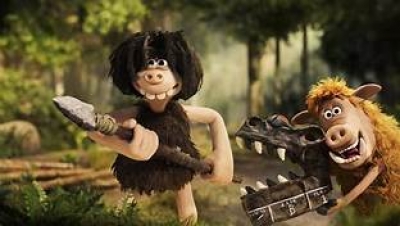 Early Man is a British stop-motion Claymation style movie set in the Prehistoric Bronze Age. The film centers on one caveman in particular, Dug, (Eddie Redmayne) and his fight to save his tribe’s home from their wealthy enemy Lord Nooth (Tom Hiddleston). The film takes place during the Pre-Historic Bronze Age, with a group of cavemen and the inhabitants of the Bronze Age city. Lord Nooth’s greedy attempt to take control of the cavemen’s home in the valley leads to a challenge between the 2 groups in the game of soccer, or football. Dug befriends a female city local, Goona (Maisie Williams) who becomes the cavemen’s football coach. Through the main character’s journey of self-realization viewers learn the value of team work and believing in yourself.

The movie will appeal to the whole family. To offer insight from a child’s perspective, my nephew, Christian, age 9, had this to say about the film:

“Early Man begins peacefully, where cavemen are in a green valley hunting. Then the evil Lord Nooth takes their land over. The main character, Dug, gets captured and is in a football game with the city’s football champions. Lord Nooth challenges Dug to a football game for the land in the valley. Because Dug is a caveman the champions tell him he cannot beat them (football is the international word for soccer). Dug goes back to his tribe and tells them what happened. They begin practicing football, then a giant (prehistoric) man-eating duck pops their soccer ball and the tribe loses hope. Dug goes back into the city to get more soccer balls from the sacred turf. He runs into trouble and, while gathering soccer balls for the tribe, he falls and lands onto the playing field where another person is playing football. The city guards begin to chase them, they escape. Dug finds out the other football player is named Goona and she is really good at football. He asks her if she would be the tribe’s football coach. She says yes, they return to the valley and begin practicing with the tribe. The team was bad at their team work. During practice Dug gets captured by Lord Nooth who tells Dug his ancestors played football terribly. Lord Nooth sends Dug back to the tribe feeling bad about their playing skills. The team builds Dug’s hopes back up and they go on to play in the football tournament against the champions. The game starts. It was intense. Little did anyone know Lord Nooth had knocked the game referee unconscious and taken over refereeing the game. That’s cheating! Lord Nooth tells the champions to injure the cavemen to win. Worst of all, with Lord Nooth as the referee, there were no foals called during the game. NOT FAIR! At a point, the game was tied, the champions had a free kick, the caveman goalie tried to save the ball. As the football came towards him, he catches it but slams his head against the post and passes out. Hognob, Dug’s pet pig, steps in as goalie. A kick by the champion’s player is made, and then Hognob not only catches it but punts it to center field at Dug - amazing! A pig did this! Then Dug dribbles the ball past the champions, kicks the ball up, lets it bounce off his butt, does a forward flip and hits the ball with his head and makes the goal! The game is over; the final score is 4 to 3. The cavemen won the game! Best of all, the cavemen get to stay at their home in the valley. What a heroic and exciting movie!

I liked the movie a lot! It was hilarious from beginning to end. Especially when Dug uses his butt to help make the final goal. The movie was sad because you see evil come into the valley and try to take over a peaceful land. The movie was inspiring because evil did not win; the good cavemen never gave up and kept fighting. They believed in themselves. This is like life because if you are losing at something, and if you don’t believe in yourself, you will never make it. You can accomplish anything if you want to in life! And that is why Early Man is great for kids like me.”

More in this category: « Fifty Shades Freed Black Panther »
back to top