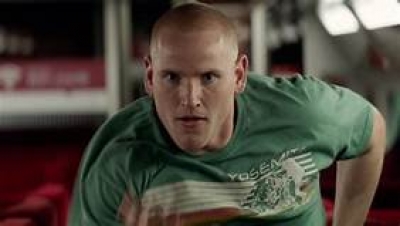 Warner Bros. Pictures, Village Roadshow Pictures and Malpaso Productions present a 94 minute, PG-13, Drama, History, Thriller, directed by Clint Eastwood, screenplay by Dorothy Blyskal and based on the book by Anthony Sadler with a theatre release date of February 9, 2018.

In the year 2005 there were three young boys that all attended Reiss Elementary School in Sacramento, California. Young Spencer Stone (Cole Eichenberger), Young Anthony Sadler (Paul-Mikel Williams), Young Alek Skarlatos (Bryce Gheisar), all three boys spent many hours in the School Principal’s office (Thomas Lennon) at this Christian school and it wasn’t for good deeds. Spencer and Alek were extremely close friends until life took them and Anthony in different directions.

Years later, Spencer (Spencer Stone) knew he wanted more in his life and felt like with a bit of effort and focus he could make it in the Air Force. Meanwhile Alek (Alek Skarlatos) was serving in the military in Afghanistan and along with Spencer and Anthony (Anthony Sadler) was planning a trip through Europe together. Spencer and Anthony after seeing some amazing sights throughout Italy meet up with Alek in Amsterdam and plan their next experience in Paris. What all three men did not know was that once they boarded the train to Paris their lives would change forever.

Every day in the world we walk past, bump into, stare at so many different people from so many different religions and countries but little do we know anything about their motives or challenges, their reasons for causing harm to others or on the other side their reasons for acts of courage or humanity. That day on the train to Paris lives were saved thanks to three American men that thought not about their own lives but that of all the others on that train no matter where they were from, what religion they followed or what color of skin they had. What mattered was to destroy evil which was the terrorist on board and prevent as much as possible any loss of innocent lives.

We have all seen the stories on the news about this train ride to Paris and the three men that saved the lives of so many people. Some say in the face of terror do not turn your back but rather fight for what is good and that is exactly what Spencer and his friends did that day. The film is basically 90 minutes and much of the time is spent on character development of the young boys with a few years as adults but so much of what was going on seemed to be filler. By that I mean Eastwood does a great job with what he has to work with on this film. Some really skilled actors are mixed in with several of the real people that lived this experience mainly Spencer, Anthony and Alek. All three men do a sufficient job to accompany a great story with a religious undertone but in my opinion it shows a bit too much the acting skill of amateurs versus professionals. In the early years it seemed that Eichenberger and Williams struggled a bit but thankfully Gheisar helped pull them along. The score is well done, the cinematography breath-taking but the foreplay so to speak is too long that leads up to a very quick and short climax. The use of flashbacks would have helped more and the use of real actors although I see what the writers and Eastwood were after but in my opinion did not achieve would have complimented the story better. A courageous and selfless act of humanity that maybe was just not meant for the big screen due to the lack of dramatic elements but it surely would have played better on television.

More in this category: « Maze Runner: The Death Cure Fifty Shades Freed »
back to top

We have 378 guests and no members online