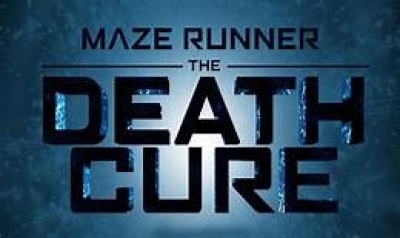 Twentieth Century Fox, Temple Hill Entertainment and Gotham Group present a 142 minute, PG-13, Action, Sci-Fi, Thriller, directed by Wes Ball, screenplay by T.S. Nowlin and based on the novel “The Death Cure” by James Dashner with a theatre release date of January 26, 2018.

Thomas (Dylan O’Brien), Brenda (Rosa Salazar), Newt (Thomas Brodie-Sangster), Jorge (Giancarlo Esposito), Frypan (Dexter Darden) and Vince (Barry Pepper) have banded together to take over a train that is carrying their friend Minho (Ki Hong Lee) among other young people into the last city for research. What they discover after a heroic rescue is that their main reason for the rescue is not exactly what they wanted.

Ava Paige (Patricia Clarkson) is in the last city known as WCKD working with Teresa (Kaya Scodelario), Thomas’s one time love, to find a cure for the Flare, a disease infecting humans turning them into zombie like creatures. Ava’s henchman Janson (Aidan Gillen) is in control of the city making sure everything runs smoothly as experiments are performed on the young in search of “The Death Cure”.

The city has new walls to keep the infected and the Gladers out since the infection rate is up by 300% with last count of every 3 infected to 1 not. Even though Teresa has gone against her friends she feels that if her work finds a cure than the sacrifice was worth it as she watches her friend Minho suffer from the experiments performed on him in the lab. Thomas knows he needs to find his friend and get him out of the city so he and some of his friends make every effort to break into the city with the help of an unexpected source from their past. As they work their way throughout the city looking for a way into the building that holds Minho they find expected dangers around every corner. What they need is a secret weapon and with a little coercion that is exactly what they found. Things were rough enough as they got in but the big question now is how do they get out and will they all get out alive.

In the end as a rebellion erupts and the answer to all their questions has been found which hopefully will save them so they can find a new safe haven where a good life can be created for the last of the survivors.

I thought the film was just too long which I would not have minded if the writing and direction was a bit better throughout the whole story. They spent so much down time in the first half but luckily it picks up in the second half making the film at least enjoyable overall. I liked the first film, liked even more the second but this one could have shaved off 30 minutes in the beginning which would have made it better. I think they worked so hard to fill in the blanks for the audience that they did not know exactly where to stop. It does have a great score that keeps it thrilling along with some awesome cinematography, special effects, make-up and explosions but most of this comes in almost too late in order to make up for the amount of dialogue. The acting is done well but at times the director seems to create some awkward moments that are a bit acting 101 in my opinion. I can see that O’Brien, Brodie Sangster, Clarkson, Lee and Esposito all portray their roles well but some of the other leads fall a bit shy as in the ones I did not mention. Albeit the film kept my attention but I could not help but find several flaws especially in one scene when Thomas calls Teresa by the wrong name. Maybe it was my hearing but I don’t think so! Unbelievably in all this tragedy all of the animals must have gone extinct since I don’t recall seeing any at all.

We have 559 guests and no members online