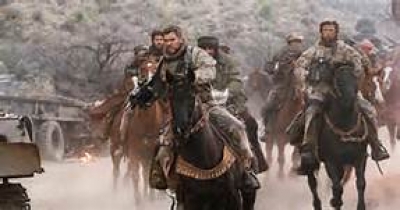 Based on a true story, this film follows the deployment of 12 Special ODA 595 Forces that enter into Afghanistan after the bombing of the World Trade Centers on September 11, 2001 in New York City. This Special Forces team has left behind their wives and children to live a soldier’s life in order to protect America from any other horrific attacks like the ones before and on 9/11.

On October 16, 2001 the team led by Captain Mitch Nelson (Chris Hemsworth) is positioned 97 miles north of the Afghan border with the odds of coming home per Nelson at 100% even though others think their chances are slim. It seems Nelson and his team beat out five other teams for this chance to go into Afghan territory to take down the Taliban. On Day 1 forty miles north of Mazar-i-Sharif the 12 men meet their escorts led by General Dostum (Navid Negahban) but later during a meeting with the American soldiers the General fears Nelson does not have the killer eyes like some of his men especially the older Chief Warrant Officer Hal Spencer (Michael Shannon). Without killer eyes the General believes Nelson cannot lead his men but time will soon tell.

Since there are only 6 horses available for the Americans 6 head out with the Afghan forces and 6 remain at camp that is until they can get more horses. What these men face in the countryside are Taliban forces with guns, bombs, rockets, and tanks and the Special Forces Team have guns and horses. It does not look like it will be a fair fight but having a war plane full of bombs to drop on the Taliban at will does help out the Americans and their Afghan soldiers.

Day 10 the men reach the liberated village of Bescham fighting their way into day 16 on the northern edge of Tiangi Gap where they know this will be their last efforts to take out the Taliban before they reach Mazar-i-Sharif. In the end a group of brave men and their horses charge the Taliban in hopes of destroying their efforts of continual killings of innocent people all around the world. The General states that today America is our friend tomorrow the enemy and if they leave they will be known as cowards but if they stay the enemy. They won the battle but still not the war after 23 days one man kept his promise to his family and Colonel Mulholland (William Fichtner). After seeing this remarkable and courageous story of 12 Strong and when you visit the World Trade Center of today you will truly understand the horse soldier statue that sits among the holy grounds where so many Americans lost their lives.

Even though I thought the film played out a bit long with one or two errors during some scenes this film is truly a remarkable telling of the true story that happened to these 12 Special Forces men in Afghanistan. As senseless as war seems apparently good men must fight evil in order to protect our homeland and that of other countries. Why? Because it is the right thing to do! These men went into Afghanistan proud and ready to kill the Taliban and stop their evil crimes against the world. All of the actors especially Hemsworth, Shannon and Negahban do a phenomenal job with their roles and the supporting characters like Pena, Rhodes, Stowell and Stults are there to keep this story not only important to the audience but dramatic and action packed for the big screen. I have to admit that during this story I have to say that praise should also be given to the actual horses that helped our soldiers and to the animal actors that made this story come to life for all to witness at a theatre near you.

More in this category: « Den of Thieves Maze Runner: The Death Cure »
back to top

We have 279 guests and no members online