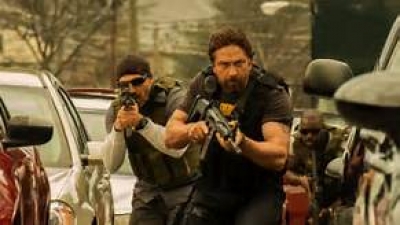 In Los Angeles there are all types of robberies every single day but on this day a group of men led by Merrimen (Pablo Schreiber) decided to rob an armored truck. When things go slightly off course these men are not only wanted for robbery but also because now they are cop killers as well. Leading the investigation from the major crimes division is Nick Flanagan (Gerard Butler) a family man with one very rough edge. He and his team, Tony (Kaiwi Lyman), Gus (Mo McRae) and a few others are working to find the men that committed this robbery in front of a local donut shop.

When some leads start coming in Nick scouts out a bartender named Donnie (O’Shea Jackson Jr.) who he knows is tied into this heist. Well Donnie leaks like a broken faucet directing the cops towards Merrimen who recently got out of prison on parole. Merrimen is working with a few others including Bosco (Evan Jones), Mack (Cooper Andrews), Levi (50 Cent) but his eyes are set on bigger project like the Federal Reserve which has never been held up.

As the plot thickens and the players are all involved both sides play out like predator to prey, cat to mouse, leading to semi-automatic shoot outs, car chases and all out mind blowing scare tactics that eventually become quite personal between Merrimen and Nick. There are many twists and turns to this story that will blow your mind in the end. I did not expect this film to be as great as it was with a phenomenally well written script and although having a hole or two it is equally as well directed. The film will keep you guessing and when you believe you have it right guess again. A great score with some very high octane shoot outs in the streets of the city help to keep this story moving from start to end. Look for a sequel in the making soon I know I will want to see it since this film was just that good.

Butler looks a bit rough in this film but playing out the role of a tough cop going through a divorce and trying to crack the code on some cop killing thieves he carries the role superbly. Schreiber as well is perfection as the bad guy who will stop at nothing to get his way. Jackson Jr. is the dark horse that helps to carry this story from start to finish. 50 Cent is tough to look at behind all those muscles but he truly projects a soft side as a family man himself but I wouldn’t want to date his daughter. McRae is a great sidekick to Butler and along with all the supporting characters helps to bring this well written always moving action crime drama to the big screen.

More in this category: « Forever My Girl 12 Strong »
back to top