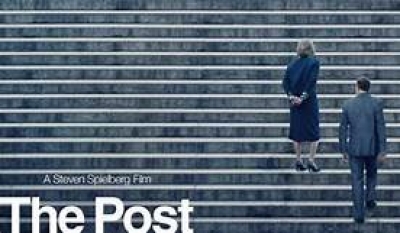 It’s 1966 during the Vietnam War and our American boys are over there fighting on the front, losing their lives every day in a battle that is secretly known to be senseless by our U.S. government. Daniel Ellsberg (Matthew Rhys) is over there in the midst of the war writing about what he sees for the American public to read. One problem, what Daniel sees and what he hears coming out of the political lips of our government for the past thirty years are all lies and the main man that helps to cover it up currently is Robert McNamara (Bruce Greenwood). Daniel after his return back to the states decides one night to take his work home, literally stealing Vietnam Task Force Top Secret documents which he copies than returns the originals.

1971, The New York Times is the top national newspaper run by Abe Rosenthal (Michael Stuhlbarg) and a vast majority of colleges and reporters. The Post out of Washington DC is a local state paper run by Kay Graham (Meryl Streep), the only woman publisher in the business; she inherited the paper after her husband died.   Ben Bradlee (Tom Hanks) runs the paper for her and has been known to take risks and that he does as the story moves forward.

Daniel meanwhile has decided to hand over his government documents to the New York Times since they are a national paper and the highest ranked in the country. While The Post is trying to cover President Nixon’s daughter’s wedding. How do you say apples to oranges here! So the New York Times lays out on the front page thirty years of lies about the Vietnam War and The Post has wedding pictures, do the math. The Post is in a financial crisis and looking to go public on the Stock Exchange not being able to play with the heavy hitters and not being national doesn’t help. Yet when Nixon finds out that the Times have proof of the U.S. killing young boys in Vietnam in order to avoid humiliation of a war they knew could never be won he decides to shut them down and take them to court for divulging secret information to the public.

The Post now has an open window they seek out Daniel in hopes of obtaining the top secret information and that they do but what they soon find out is that if they go to press with this latest news they will find themselves in the same hot water as the Times. Censorship, collusion, the Supreme Court, Kay Graham is left in a man’s world to make the ultimate decision whether to go to press or not. If she does she could lose everything that her entire family worked for through generations. If she doesn’t well then the press is no longer serving the govern but rather the governor. Amazing how relevant this story is to our life and times now with the President currently in our White House whose name I rather not say.

I loved this film about a time in history that is so reflective of our current government and the situation that the people and press face from day to day being called “Fake News” by a man that like Nixon could surely be hiding a lot behind is consistent lies. Spielberg has the direction perfect as do the writers who truly take us back in time and bring us into the present. A great score, with timely wardrobes and a lot of history all add up to a brilliant story. Streep and Hanks are true perfection as the leads with every supporting character bringing this biography film of the past into a thought provoking look at the present. This is a film that should not be missed although Trump supporters may think differently especially for those that stood by Nixon as well. The truth always has a way of finding its way to the surface and frankly karma can be a bitch.

More in this category: « Insidious: The Last Key Paddington 2 »
back to top

We have 330 guests and no members online