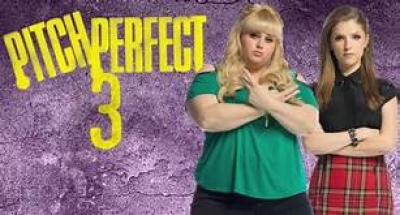 Three weeks earlier than the explosion opening we find out exactly what the Bella’s were doing on a yacht that just happens to explode into a fireball. The girls won their last champion competition in school and have all moved on to bigger things in life, jobs. Some they hate and some they like but most they don’t love so when they have the opportunity for a Bella’s reunion at the Brooklyn Aquarium they jump at it. One problem they were not invited to perform but Aubrey (Anna Camp) comes up with an idea to compete against some other groups on a USO tour throughout Spain, Italy, Greece and the South End of France. The prize is the opportunity to open for DJ Khalid.

The Bella’s are off for an adventure and following close behind them are Gail (Elizabeth Banks) and John (John Michael Higgins) who happen to be doing a documentary on the girls. When the Bella’s arrive on base they are greeted by their escorts, Chicago (Matt Lanter) and Captain Bernie who show the girls around. It just so happens that Chloe (Brittany Snow) has eyes on Chicago and well Beca (Anna Kendrick) has taken a liking to DJ Khalid’s right hand man Theo (Guy Burnet). The Bella’s meet the other groups all by the way that have great voices and play instruments and as for the Bella’s they only have their voices which could create an issue.

When they settle into their rooms at the hotel, Fat Amy (Rebel Wilson) finds a stuffed bunny on her bed and at that moment she knows her estranged father (John Lithgow) is somewhere near and probably looking for something from his daughter. Something dad wants which is being kept for Patricia aka Fat Amy by her mother in a Grand Caymans bank account. As the story leads in to an explosive ending we find out just who Fat Amy is and the special powers she possesses, why the Bella’s are on that yacht when it explodes and just who won the USO competition. In the end a group of naughty toxic girls realize that family is always there no matter what to lift you up not tear you down. Make sure you stay for the credits and out-takes they’re pretty funny more so than most of the movie.

I have to say I enjoyed this film which is filled with music from start to finish more so than dialogue in a very simple story line that doesn’t hold up to the first and even the second film in the franchise. Grant it there are some very funny moments many thanks to Wilson but I would have enjoyed a little more development among the girls themselves. We do actually get to experience more than a mumble out of Lilly (Hana Mae Lee) but many of the other girls are backdrops to the three main leads Kendrick, Snow and Wilson which all do a great job entertaining the audience for 93 minutes. I just kind of felt I wanted a bit more guts like finding out more about Fat Amy’s childhood and her father. Albeit the film is music intense, sometimes dramatic and will have you laughing out loud at times but it did seem to lose a bit of its flare that the previous stories had but it’s definitely worth seeing and am sure many will hit the theatres to do so.

More in this category: « The Greatest Showman All the Money in the World »
back to top