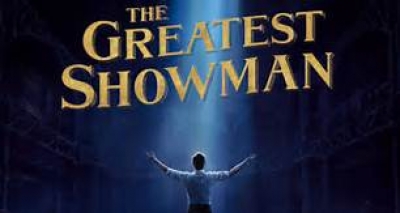 In a boy meets girl moment, young P.T. Barnum (Ellis Rubin) meets young Charity (Skylar Dunn) but not to the liking of her father for you see young P.T. was a working class boy in business with his father and well below their standard of class to speak with his daughter.

Throughout the years Charity (Michelle Williams) and P.T. (Hugh Jackman) kept in touch with letters and when both matured they married and had two daughters. P.T. had always been a dreamer and wanted to give to his wife and daughters the life he never had, filled with everything they always wanted but P.T. had other motives for his dreams as well, to prove he could be as socially accepted by the rich in society.

He thought of an idea to buy Barnum’s Museum of Curiosity with a loan from the bank and believed that it would take off making him and his family wealthy. It did not! Thanks to his young daughters and their own imagination they gave him an idea to add live yet odd and peculiar people. He did just that by convincing people with differences to join his dream, the bearded lady, the tall man, the short man, conjoined twins, the trapeze artists and others. At this point the tickets were selling and money was rolling in but still he was not considered a member of the upper class but rather a rich man that smelled of peanuts.

Even though he was now successful amongst the middle class, although he had his protesters, he wanted to belong and be welcomed by all especially the rich. He seeks out a wealthy young man, Phillip Carlyle (Zac Efron), who he convinces to go into business with him. Landing Carlyle to his musical circus he thought would help bring the rich into accepting his form of entertainment. It did not! Rather it caused the rich to look down on Carlyle especially after he took a liking for Anne Wheeler (Zendaya) the acrobat from the circus but it wasn’t just her job they looked down on her for it was also the color of her skin.

P.T. heard of a talented woman, Jenny Lind (Rebecca Ferguson) who he meets at an invite from the Queen of England. He met Jenny and convinced her as he did many others in his life to follow him telling her he would make her a huge star in New York, for that matter the world since she had a voice of a nightingale and the heart of an angel. She was beautiful and her voice even more so making her and P.T. a huge success among the rich but he never mixed her career with that of the circus people. He now won over both the middle and the upper class but things took a turn for the worse and everything in his life he built suddenly burned up in flames. In the end, true love and true friends were all the support P.T. ever needed so both he and his work have evolved once again but this time everything he wanted was truly everything he needed and it was always right in front of him the whole time.

This film is visually beautiful, musically enchanting and overall purely entertaining. Great direction filled with brilliant voices, costumes, excitement and flare this film will keep your eyes glued to the screen from start to finish. I thought there could have been a bit more character development among some of the characters but overall spectacular. I have boycotted circuses from my life especially for the last 28 years due to hosting my national animal show learning of the abuse to the animals especially the elephants and was happy to see this film did not make the animals a focus of the story but rather a backdrop for the most part. I even heard one or two lines that I thought were acceptable in certain circumstances involving the animals but like I said they were not the focus and thankfully these days are being used less in any circus side shows. Albeit, I did thoroughly enjoy this story and the superb talent that came with it such as Jackman, Williams, Efron and Ferguson. By the way you could hear a pin drop during the scene in which Jenny Lind sings for the first time, it was breath-taking. Filled with dance, music, vocals and a great supporting cast this is truly a great film for the family to see over the holidays although I’m sure it will have its haters due to the use of elephants in the shows but that was then this is now and thankfully mankind is evolving too.

More in this category: « Jumanji: Welcome to the Jungle Pitch Perfect 3 »
back to top

We have 455 guests and no members online