Jumanji: Welcome to the Jungle Featured 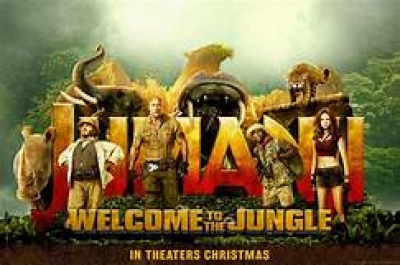 Jumanji: Welcome to the Jungle

In 1996 a young man named Alex has gone missing after playing a game found on the beach called Jumanji. Twenty years later his father lives in the same house that is now old, run down and known by the neighborhood kids as the freak house. High school students Spencer (Alex Wolff) the nerd, Fridge (Ser’Darius Blain) the jock, Martha (Morgan Turner) the book worm and Bethany (Madison Iseman) the diva, all end up in detention at the same time. Once in detention left with a recycling chore to fulfill they stumble upon a video game from the 90’s called Jumanji, so they decide to play. What happens next all four are transported into the game somewhere in a jungle but not quite as they were? You see each player took on a character in the game and when they got pulled in as a player in their head they were still the kids they were before but physically they were the look of the players. Spencer (Dwayne Johnson) was now a brave, hot looking, beefy, strong professor, Fridge (Kevin Hart) was a pint sized far from jock allergic to cake weakling, Bethany (Jack Black) was now a man with man parts if you know what I mean but quite intelligent and Martha (Karen Gillan) was a hot woman prolific in martial arts.

Right from the start the adventure begins as they all try to settle into the new bodies, some better than others. They meet Nigel (Rhys Darby) who is part of the game itself giving them their rules to lift the curse and end the game before they use up all their life lines. Along their journey they encounter hippos, rhinos, snakes and other creatures in the jungle but some of the most ruthless encounters are the bikers led by the evil Van Pelt (Bobby Cannavale) who will stop at nothing to retrieve the jewel before the four players can return it to the Jaguars eye.

All the players have strengths and weaknesses that can help their cause or basically kill them using up their given number of lives. Along the way they meet the Pilot (Nick Jonas) who is also trying to escape the game but could not make it through all the levels and with one life left he is quite afraid of taking chances. Margarita anyone? Right down to the defenders the players are out for one thing and one thing only and that is to win and return home. A smoldering kiss won’t hurt either of course.

I found myself laughing throughout the film once it takes place in the jungle. Some great special effects, writing and direction add to this fun game of Jumanji along with the score and some awesome adventures. I’m sure the film will do well especially for the young demographic who ironically will enjoy some older actors. Johnson is hysterical as well as super-human in many ways. Hart is superb and lightens up his scenes filled with comedic laughter, truly why I’m such a fan of his and his roles. Black was so funny as a girl trapped in an older man’s body but I did find him slipping out of voice once in a while. As for Gillan who I’m personally least familiar with, she truly owned her character in looks and talent. Not to forget Jonas he looks good and does justice to his role being more of a support than a lead. As for all the younger actors they all covered their own but I did find Blain to be slightly off with is character as the high school jock personally I would have cast a different actor even though their roles are small they still open the film causing me to wonder if this film will be as funny as I hoped. Thankfully the leads along with Cannavale who does an ok job are there to drive this movie home.