The Shape of Water Featured 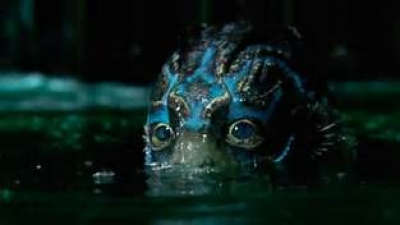 Review written by Jon patch with 3.5 out of 4 paws

The Shape of Water

Elisa Esposito (Sally Hawkins) a single mute woman lives in Baltimore, Maryland. It seems as a child she was found by the river with her vocal cords slashed. Her neighbor Giles (Richard Jenkins) is a close gay friend who lives next door and spends most of his days with his cats alone in his apartment painting. Giles is alone most of the time other than when Elisa is there watching musicals on his television set. The time is the early sixties and discrimination was rampant among the white community towards blacks and homosexuals. Elisa works at a government facility as a cleaning woman with her friend Zelda Fuller (Octavia Spencer) also a cleaning woman.

Elisa’s life persists of the same routine every day, wake up, take a bath, masturbate, cook eggs, see Giles, go to work, clean the facility along with a number of other maids, return home, goes to sleep then wakes up with her alarm for yet another similar day. One day was different, while cleaning up in one of the research water tank areas authorities led by Richard Strickland (Michael Shannon) bring in a mobile water tank and as Elisa takes a peek inside while no one is looking she can’t believe her eyes. Later when an accident occurs inside that room Elisa and Zelda are sent in to clean up a lot of blood and a few fingers. Against company rules, it doesn’t take long for Elisa’s curiosity to kick in, wanting to see more of what this so called God from South America is all about. What she discovers is a friendship and communication between her and the creature and what Dr. Robert Hoffstetler (Michael Stuhbarg) finds out is that this creature is intelligent which throws a wrench in his long term plans for the creature that can live for some time outside of the water as well.

When Elisa finds out the fate of the creature she enlists the help of her friends, Giles and Zelda, to help her steal it but what she discovers is yet some help from an unlikely source. As the relationship between Elisa and creature develops more of a bond is felt between them both in such a way unimaginable to humans. In the end as Elisa dreams of a musical and how much she loves the creature life for some may live happily ever after yet for some maybe not!

I absolutely loved this story, the music, the period in which it takes place reminding me of a world once was, not perfect by no means since homophobia, segregation, racism was rampant but still it had its hopes and dreams for many in the world. Emotional dreams that shine so prevalently from the relationship between something uncommon, the creature to something human, Elisa. Del Toro works wonders as he slips from one scene to another flawlessly and as smooth as a babies bottom. We have come a long way in many aspects of life but for some reason this year making progress feels like a fish caught on a hook with no direction other than one leading up to the end. Let’s hope this changes soon before it’s possibly too late, as shown in the final minutes of this story. There is nudity, bad language, conspiracy, musicals, art, cruelty yet love in this story that makes you feel like an outsider and a bit of a misunderstood creature yourself but through it all this film is beautifully directed and written with a few cliché moments that may seem familiar, E.T., Loch Ness Monster, Splash to name a few but it surely stands on its own as a must see film at the theatre. As for the animal aspect of the film if you’re a cat lover like me remember it’s only a movie and not real life. But it could be!

Hawkins is amazing as she reels you into her love affair with the unknown. Jenkins is that friend that you wish you had true to the end no matter what, standing up for the right thing to do. Shannon is more of the monster in this film than Doug Jones who plays the Amphibian Man. Stuhlbarg is a sign of hope but the one true love for me is Spencer who I have become a big fan of for many years and once again I profess my love for a truly gifted actress with a huge heart and soul. A great cast with a wonderful supporting cast surrounded by backdrops of the past all brings this film to near perfection.

More in this category: « Coco Star Wars: The Last Jedi »
back to top

We have 788 guests and no members online