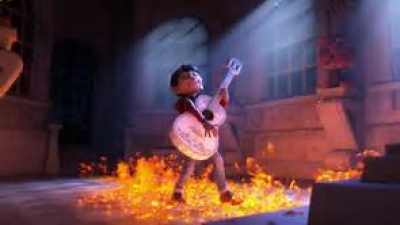 Many years ago in the 1940’s a father left his wife and young baby girl to pursue music never to return home to his family ever again. Presently that little girl is still among the living and her name is Coco (voice of Ana Ofelia Murguia). Her great great grandson Miguel (voice of Anthony Gonzalez) lives with her, her daughter, grand papa, his mother and father. Music has been banned from their family ever since the day Coco’s father left his family. Instead Coco’s mother started a shoe business which became a growing and thriving family company throughout the years.

Miguel always knew his heart was in music, all he ever wanted to do was sing and play the guitar like the great Ernesto de la Cruz (voice of Benjamin Bratt). His Grand mama would never allow any type of music to be played or heard in the family. All she wanted Miguel to do is shine shoes and honor the one day a year that they celebrate the dead. As a tradition they would place a picture of deceased loved ones on an alter so that they are never forgotten and can cross over the bridge to the living on that special day. There was one picture of Coco as a young girl with her mama but her papa’s face has been torn from view never to be remembered except by that of Coco but she is very old and when she passes so will her father in the land of the dead.

All Miguel wanted to do was prove he can sing and he planned on entering a contest that night but when his Grand mama discovered his plans she broke his guitar and his dreams causing Miguel to run away with a friendly neighborhood dog. He planned on borrowing Ernesto’s guitar for the contest from his crypt at the cemetery but when he grabbed the guitar from the wall he was soon visited by dead members of his family that led him into the land of the dead but there was one problem Miguel was not quite dead. Word got out that a live boy was in the land of the dead but before his dead family members could send him back to the living Miguel fled once again in search of Ernesto. You see Miguel believes that Ernesto is his distant relative and he enlists the help of a stranger named Hector (voice of Gael Garcia Bernal) who supposedly is an old friend of Ernesto’s to help find him. One problem though is that if Miguel does not leave the land of the dead before sunrise then he never will. During his extensive journey in the colorful land of the dead Miguel meets many people, skeletons actually, yet what he discovers in the end is the truth that only one person ever knew about which led Miguel to help change the past and live on forever in a world more beautiful than before.

This film is absolutely phenomenal filled with so many colors that pop out at you in 3D. The direction is superb, the voices are spot on to the characters, and the animation is hands down awesome as only Pixar can do. The story is brilliant, hats off to the writers that brought a piece of culture on to the big screen in such a way that is so pleasing to the eyes and ears making you laugh out loud and even shed a tear from time to time. This is one film for the DVD collection that is worth watching more than once. Such a beautiful film with a beautiful story appropriate for all ages, worthy of seeing by the whole family at a theatre near you. Don’t miss it you’ll regret it. I loved the dog it added a great sense of boy’s best friend.

More in this category: « The Man Who Invented Christmas The Shape of Water »
back to top

We have 381 guests and no members online