Murder on the Orient Express Featured 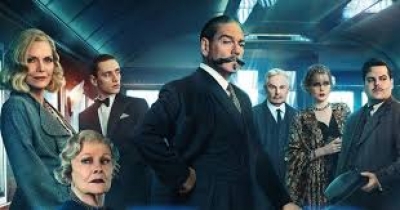 Murder on the Orient Express

The film opens in 1934 at the Wailing Wall of Jerusalem where Detective Hercule Poirot (Kenneth Branagh) is solving the case of the priceless stolen relic that was believed taken by one of three men, the Rabbi (Elliot Levey), the Priest (David Annen) or possibly the Imam (Joseph Long). Yes it sounds like the opening of a joke but in the end the real truth is revealed.

During their travels one person is murdered on the train and although many of the passengers have secrets that are one by one revealed. There is a killer on the Orient Express and it is Detective Poirot’s job to unravel the clues and determine before they arrive at the station who it is. When an avalanche strands the train on the tracks the Detective has a little more time to work on the case as the emergency crew is on their way with help. People begin to point fingers but the very observant, educated, and OCD detective is on the case and his conscience and constant determination is sure to solve it and in the end reveal the guilty party behind this gruesome murder. The next stop for this brilliant Detective Poirot apparently will have him travel once again across the world to solve a murder on the Nile.

I know Branagh kept true to the Agatha Christie novel which I wish he and the writers were able to take a few liberties. Since the film had such an amazing cast I found that many of them had very little to say let alone reveal their true acting skills. Most utilized was Branagh and Bateman with a bit more than the others of Gad and Pfeiffer but as for the other actors they seemed to be trophy pieces to show off in this murder mystery story. There is some absolutely wonderful cinematography with a nice score but the story really has a few lag time moments. I wish they had a bit more intrigue, surprises and more dialogue for the other great actors. They all know how to act and they pretty much all do it quite well but it is really missed in this film and it would have been nice to have a bit more salt to this story and a little less pepper if you get my drift. There are two dogs utilized and other than some passenger comments they were not harmed in any way. Overall all the actors are brilliant just under-used but it is still a film worth seeing especially if you have not seen the original.

More in this category: « The Killing of a Sacred Deer Justice League »
back to top

We have 346 guests and no members online