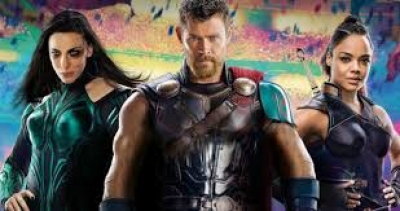 When Thor (Chris Hemsworth) escapes a prison outside the universe he eventually makes his way back to Asgard with a little help from the lady’s man/janitor, Skurge (Karl Urban) thanks to the turn of the sword. After a unexpected bumping into between Thor and his brother Loki (Tom Hiddleston) they find themselves in New York City where Thor has a conversation with Doctor Strange (Benedict Cumberbatch) eventually leading up to both brothers having a spiritual conversation with their father Odin (Anthony Hopkins). Odin informs both men that they have a sister, an older sibling, Hela (Cate Blanchett) and in her opinion the rightful successor to the throne and kingdom of Asgard.

Once the brothers come face to face with Hela, the Goddess of Death, they realize they need help in fighting her from destroying Asgard. Things don’t go quite as planned as both brothers end up on another planet, full of garbage, and somewhat violent people all led by the Grandmaster (Jeff Goldblum). When Valkyrie (Tessa Thompson), quite the drinker, takes Thor prisoner she turns him into the Grandmaster to fight in their arena against the deadliest opponent known to man, it turns out to be Thor’s old friend Hulk (Mark Ruffalo). One problem the Hulk has been green for over 3 years and cares nothing about Thor other than to fight him and win.

Back on Asgard, Hela has killed most of the soldiers and has taken control of the city with the help of some old friends, one being her giant wolf, Skurge plus many others from below the grounds. Hela needs to be destroyed and Thor knows he needs to escape through the Devil’s Anus with the help of Bruce Banner and Valkyrie return to Asgard and save the Asgardian population from the evil clutches of Hela.

Thor has lost his hammer and relies on his powers as God of Thunder yet he relies also on his brother Loki the God of Mischief as well. A wise king does not seek war but a queen knows she must always be ready for it. Now with the help of some friends, including Heimdall (Idris Elba), family and Surtur (voice of Clancy Brown) Thor fights to save Asgard and destroy his sister but Asgard is not just a place but rather a people and as an old chapter ends a new ones arises, next stop Earth or maybe not! Remember to stay all the way through the end of the credits for what happened and what’s up next.

What can I say it’s a Marvel movie and I’m sure it will do quite well even with Thor’s new look. Brilliantly directed and written the 2 hours go by pretty fast since there always seems to be something going on. I liked the humor injected into the film but thought maybe there was just a slight bit more than expected which for me did not always work. Great costumes with a superb score help to bring this story to life but it is the action, 3D and superb special effects that keeps the blood pumping through the veins at all times.

Hemsworth is once again quite the character and plays Thor to perfection even without his hammer and a new haircut. Hiddleston of course cannot always be trusted and he plays it well. Blanchett knows how to kick butt and once again succeeds here. Elba does not have a huge role as does Goldblum, Urban, Cumberbatch, Hopkins and a few others but they complement the story line. As for Ruffalo and Thompson they are the perfect sidekicks to help Hemsworth fight for justice and good over evil. As for the animals used in this film, the wolf and the horses all seemed to take abuse in their scenes but hey remember it’s only a movie for entertainment purposes only.

More in this category: « Goodbye Christopher Robin The Killing of a Sacred Deer »
back to top

We have 479 guests and no members online